On August 30, Marc Daly took to Instagram to post a statement from his attorney to address a report containing records from the New York City Department of Finance. As reported, Marc was hit with a whopping $111,205 federal tax lien amid his wife’s Real Housewives of Atlanta salary cut.

Marc posted his response on his restaurant SoCo’s page with the caption, “PSA🗣 BEWARE of fake friends in business.”

“There was some unfortunate reporting today which was published before we had a chance to correct the record.” The statement below starts off, “The full story is there had been a $100,000 tax assessment based on incorrect information.” Read the entire statement below. 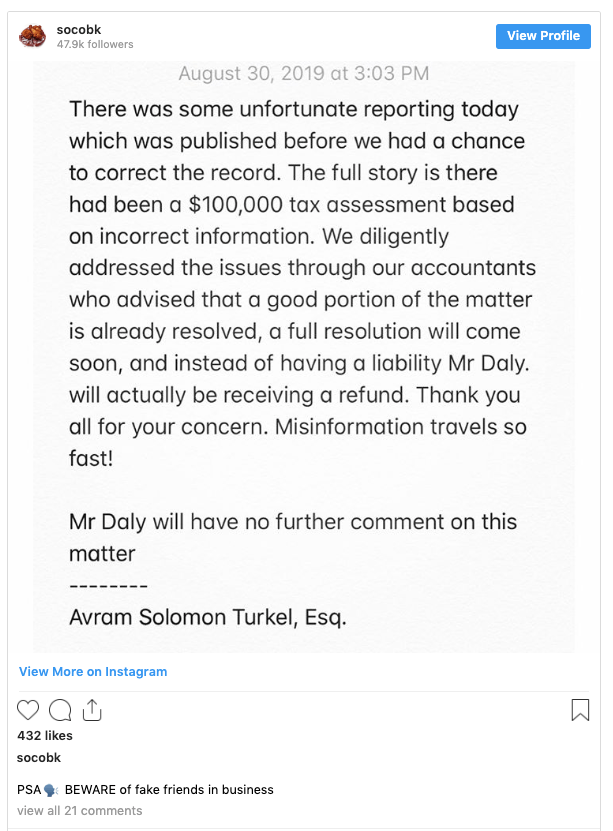 According to court records, Kenya Moore’s husband was hit with a $111,205 federal tax lien but the Brooklyn businessman is calling the situation a misunderstanding.

On May 23, the New York City Department of Finance imposed a tax lien on Marc Daly and as of Aug. 29 the lien has not been paid.

Do you believe Marc Daly’s explanation for incurring $100K+ tax lien? Sound off below.