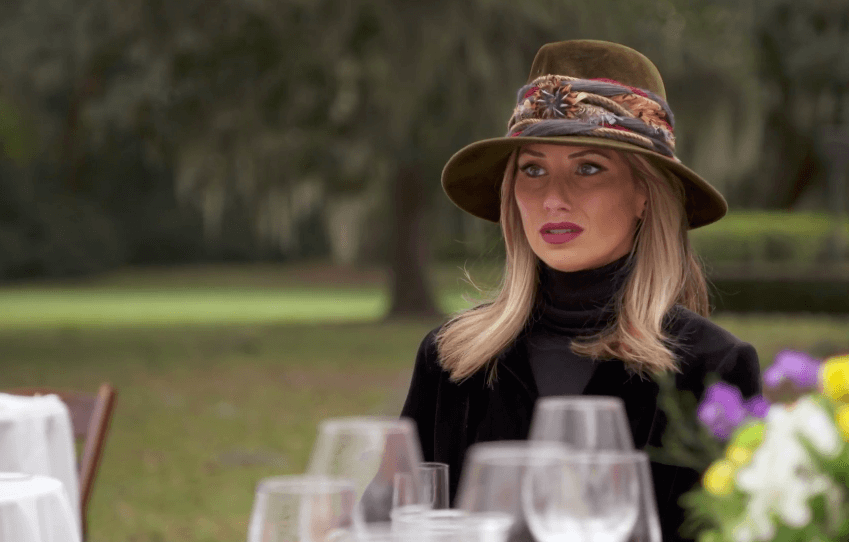 We begin this week’s episode of Southern Charm with our charmed ones playing with their pets. Cameran Eubanks feeds her pup before diving head first into a bag of fast food, Naomie Olindo looks for her cat, Gizmo. Craig Conover plays with his dog in the yard, while Chlesea Meissner’s pup disapproves of her new hat. And Shep Rose tussles with his new dependent, Little Craig.

Over at The Meeting Street Inn, a Limehouse property, we catch up with Eliza Limehouse and her mom. Liza feels the need to live up to her family’s name and whines that people hate her on sight, because of who she is. But she insists she’s not a polo brat, but a member of the Limehouse tradition, having worked in three inns in Charleston.

One day, Liza, along with her sibs and cousins, will inherit $50 million in property. So, she’s trying to learn all the aspects of the hotel biz. As if all this weren’t pressure enough, Liza’s mom tells her that her lipstick is wrong, her nails look horrible, and the lobby sofa looks like it belongs in a funeral parlor. Get on that, Liza! Having to live up to her mother’s southern belle expectations is impossible.

But putting Liza’s imperfection aside, she planned a fox hunt for the coming weekend. Unfortunately, you can’t shoot those pesky critters in the rain. (Who knew?) But since she’s already invited the charmed ones, she now has to go with plan B: a brunch and a skeet shoot. Liza assures her mother that she and her boyfriend, Don, have everything under control. But just bringing up the name of her beau makes Eliza’s mom start criticizing again. Can’t Eliza find a man closer to her own age? Maybe Liza is looking for a father figure? Not to mention that fact that Don doesn’t come from an old family who happen to have a bridge named after them. But Liza’s mom gave her all to the Limehouse name, and look how that turned out — an ugly divorce due to her husband, Chip’s, having a love child with his mistress.

At the salon, Cameran meets Naomie for pedicures, and she goes straight for a glass of wine. Keep in mind, she celebrated her birthday the night before by getting so drunk, she could barely stand on her own. Naomie hands over a smoothie instead.

Cam soon fills Naomie in on Craig’s delusional mindset. He thinks that Naomie is unhappy with her new man, Metul. That she and Craig need closure before they can both move on. As Naomie hears the news, she sets aside her smoothie to grab her own glass of wine. Though she and Craig broke up over a year ago, Craig’s still clinging to the hope that Naomie will come back to him. Cameran encourages Naomie to be honest with him, to tell him her heart now belongs to Metul — a doctor who actually gets out of bed every morning and goes to work. Basically, the anti-Craig.

Craig goes for a walk with Shep and Little Craig. They talk about the night before and how Craig went off on Austen Kroll. He brings up the trip to Colorado and Naomie’s resistance to join the group. Shep, who’s never been in a long-term relationship, thinks Craig and Naomie should look back on their time together with reverence and peace. Why can’t they get past it and continue to have fun? That’s what exes do, right? No, Shep. Not unless they’re filming a TV show together.

At the local barre class, Kathryn Dennis, Austen, and Chelsea turn up to stretch and potentially pull a groin muscle. The girls have no problem with their pirouettes, but Austen is a little out of shape. The man can’t bend without groaning in pain.

Talk soon turns to Eliza’s skeet shooting weekend. Kathryn’s brother is getting married, so she won’t be on hand. And speaking of Liza, she’s good buddies with Thomas Ravenel’s crazed ex, Ashley Jacobs. Austen thinks Ashley will turn up, and the girls think mixing Ashley and guns are a bad combo.

In the meantime, Liza calls Ashley Jacobs as she tootles around Charleston. Even though Ashley and Thomas have broken up, they recently went to get Botox shots together. (Btw, Liza is also getting Botox — and she’s 22! That’s insane, yes?) Anyway, Ashley and Thomas broke up because he was charged with assault, which put a damper on his polo travel. Huh?! Liza wants Ashley to come to the skeet shoot and make peace with the charmed ones. And since Kathryn won’t attend, it’s a perfect time for Ashley to face the others.

Cameran, Craig, and Naomie have lunch together. Cam and Shep want Naomie to come to Colorado. But Naomie doesn’t want Metul to feel uncomfortable. Who goes on a trip with their ex? But Cam thinks Metul should be more understanding.

At Eliza’s house, we see the caterers getting everything set up outside, despite the cold weather. As the guests arrive, they grab drinks and hang out by the creek. Then Austen, Whitney, and Craig show up. Shep shoots his granpappy’s gun to kill that darn clay pigeon. Even Whitney manages to hit a target. But poor Austen isn’t very good with a gun. Chelsea looks on in disappointment. Meanwhile, Cam lectures Craig about being cool with Naomie. He blames his bad behavior that night on too much fireball. But his true feelings for Naomie were revealed the more he drank.

Naomie takes Craig aside to chat. He doesn’t want to be the reason Naomie doesn’t join the ski trip. But she insists that by refusing to go, she’s respecting her new man. Craig swears he’s over their relationship. Naomie thinks he’s angry and depressed over their breakup. Craig agrees and has been unable to fill the void she left behind. All the partying is just a distraction. As they talk, Craig finally realizes things are truly over between them.

Everyone is having a good time, filling up on booze and food, and then Ashley arrives. Eliza says that everyone should forgive and forget — that’s the good Christian thing to do. But Ashley has said some nasty things about all the charmed ones, including Patricia Altschul.

Once Ashley steps foot on the plantation, Naomie heads for the hills. Austen also makes a fast getaway. Naomie and Austen bond together in fear of Ashley. Naomie doesn’t even want to hit the bar in order to avoid her. So Whitney steps in and grabs a fresh drink for Naomie, and at the same time takes Ashley to task for shit-talking his mother. Ashley defends herself, saying Patricia talked badly about her, too. In fact, Ashley has nothing nice to say about that woman. Whitney calls her delusional.

Ashley comes up and gives Danni Baird a big hug. Danni is a little freaked out, because she doesn’t like Thomas’s ex either. Ashley says she’s embarrassed for the way she treated Kathryn and needs more empathy. Madison II (owner of Gwynn’s, a boutique where Kathryn works) calls bullshit, stating Ashley is still talking trash about Kathryn on social media. Ashley tells Madison II to keep her mouth shut. She doesn’t want to talk about the past. Two weeks ago is hardly “the past” Ashley.

Next, Ashley sneaks up on Chelsea and Cameran. She figures it’s safe, because Chelsea is holding onto Little Craig. She can’t haul off and smack Ash with a puppy in her hands, now can she? Cameran wants to know why Ashely tweeted that the charmed ones were losers. Ashley counters that Cameran called her a horrible person. Yeah, but only because that’s just true tea. And we see all of Ashley’s horrible moments from last season. But she claims she was merely a pawn, and the person talking shit about Kathryn behind the scenes was none other than Patricia. Cameran isn’t buying it. Ashley says Patty got her all worked up over Kathryn. But what does that have to do with the rest of the group? Isn’t Ashley here to see Liza Limehouse? Chelsea tells her to go sit with Liza and leave the rest of them alone.

Ashley claims she wants everyone to be civil and worries about what will happen if they run into each other in town. Well, according to Naomie, when she last saw Ashely, Thomas’s ex loudly called her a bitch in a crowded restaurant. Ashley blows that off like she does every other accusation. Lies! All lies!! But guess what? There was a witness to this name calling incident. Madison II was there and heard the whole exchange. And Ashley’s response? “The reason I probably called her a bitch was because she was a bitch.”

Eliza is finally seeing the Ashley that the rest of the group sees. Now Liza feels like an idiot for inviting her in the first place. When confronted, Ashley goes from denial, to being defensive, then finally saying she was wrong. But isn’t this the pattern we’ve seen from her before? Ashley says she’s filled with regrets. She tears up as she apologizes. Austen isn’t buying any of it. He says her crocodile tears don’t move him, and Naomie stands her ground, too. Ashely tells Austen she doesn’t care about him, so why is he still talking?!

Craig and Shep have stayed far away from the confrontation as they cast their fishing poles in the creek. But Craig states that it takes a certain kind of crazy to show up and meet with a group of people who dislike you.

Now Ashley tries to tell Naomie that she called her a bitch in a joking way. “You’re such a bitch. Ha ha ha.” Naomie shakes her head in disbelief. Ashley was in slay mode that night, as usual, and angry that Naomie wouldn’t give he a hug. There was nothing funny about it.

And that ends our episode. So, was Ashley stupid to show up to the skeet shooting party? Was Eliza wrong to invite her in the first place? What did you think of tonight’s episode?