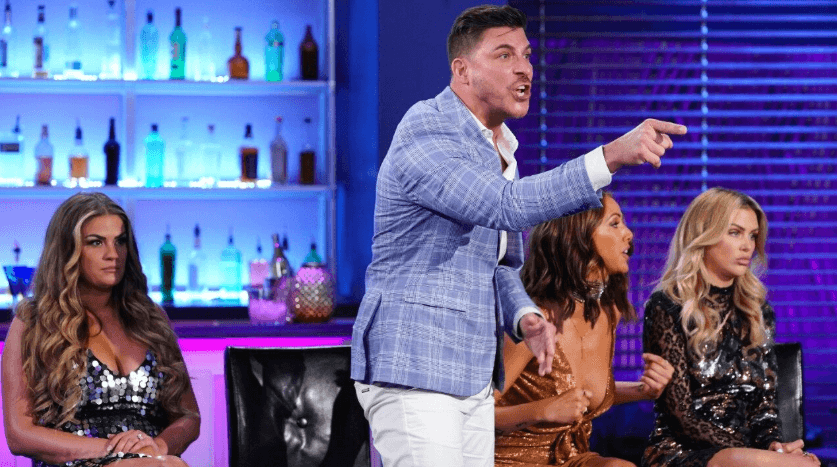 Vanderpump Rules three-part reunion kicks off tonight (Monday, May 6), and SURvers are amping up the drama as they rehash issues from the season.

“This is going too far,” Lisa Vanderpump shouts in the trailer for the three-part reunion.

In the clip below, Jax and James go head to head over vicious Twitter allegations and almost comes to blows. Andy Cohen brings up a tweet James posted, stating that Jax and Lala Kent needed to get over the recent deaths of their fathers.

“Why would you say that?” Jax asks James. “I mean, everything aside…”

James changes topics and accuses Jax of setting up a fake account pretending to be his girlfriend, Raquel Leviss, and posting a fake breakup announcement.

“You want to talk about my dad?” Jax asks James. “You and your stupid f—king girlfriend are useless!”

“Did you make the Twitter about Raquel?” he shouts. “Listen to me, you made a Twitter under Raquel’s name and you said, ‘I realized that boy was having sex with men. He’s over.’ Homophobic gestures.”

Jax denies James’ accusation but the cast sides with James. Ariana Madix tells Jax that his phone number was connected to the fake account, which he also denies. The longer the discussion goes on, the more heated both Jax and James get.

“So, if you wanna talk bad f**kin’ tweets, mate,” James yells while standing up and pointing at Jax.

Jax explodes and launches from his chair towards James on the other side of the set. Andy Cohen has to get out of his chair to break them up.

Also in part one of the reunion, host Andy Cohen tackles Brittany’s surprising engagement, the rap that ended James’ friendship with Jax, and the trials and tribulations of Tom and Tom’s first year in business with Lisa Vanderpump.

Watch a preview of the drama above and tune into part one of the Vanderpump Rules reunion Monday, May 6, at 9:00 p.m. on Bravo.