Tuesday night on the Real Housewives of Beverly Hills, we open our episode with Teddi Mellencamp and Kyle Richards taking their daughters to a kiddie photo shoot. Apparently, Portia loves applying makeup. She’s so good with a blush brush, the company, Petite and Pretty, wants to hire her to model. Slate, Teddi’s five-year-old daughter comes along.

As the girls have their makeup done and ham it up for the camera, Kyle rethinks her decision to be a bridesmaid for Camille Grammer. Camille has the bad taste to choose a dress with capped sleeves. Kyle can’t wear capped sleeves without looking like a porkchop. Everyone knows, the focus shouldn’t be on the bride, it should be on Kyle and her upper arms.

They discuss their upcoming RV trip. Teddi’s husband, Edwin, bought a massive RV for tailgating purposes, so they can all clamber in and take it for a spin. The women talk about camping, even pitching their own tents. Kyle warns Teddi not to make a sexual joke here. “Boner?” Teddi whispers. That’s the word she was trying to avoid, Teddi, thank you.

Over at the Hamlin residence, Lisa Rinna is dealing with domestic problems, like her carpet people. When Harry’s home, he takes care of all that stuff. He’s as soothing as a Xanax smoothie. Lisa put aside her new rug to call Erika Girardi, who’s on tour in New Jersey. She updates Erika on the dinner from last week, where Camille had an emotional freak out and Lisa Vanderpump was a no-show. Rinna complains that Vanderpump shouldn’t turn her back on all her friends. Um, what friends again?

In Malibu, Denise Richards and her well-endowed husband work out. Sure, she and Aaron wake up at five every morning and bang it out, but they still need to work on their biceps. But she also wants to work on giving peace a chance by having lunch with LVP. If anyone knows mediation, it’s Denise. All that legal wrangling with her ex, Charlie Sheen, should come in handy for something.

Next, we find Dorit Kemsley sitting in the backseat with her adorable kids. Jagger plays a baby guitar and sings, “Rock n’ rooooooooll.” Pheonix, isn’t as musically inclined, but just as cute. They arrive at Kyle’s house, where Portia and her friend have to keep the toddlers entertained while the women head outside to have wine, cheese, and yell at the dogs. Dorit comments that having dogs is like having children. No, Dorit. It’s too soon. And you wouldn’t pawn your kids off to a stranger, like you did with Lucy Lucy Apple Juice, would you?!

Finally — finally! — we find LVP in Villa Rosa. The kitchen is still a mess, but she and her friend, Elena, decide the room will add some much-needed freshness into Lisa’s life. While Elena stays with the animals, Lisa takes wedding gifts to her lunch with Denise. She talks about distancing herself from the other women and how it’s allowing her to finally grieve, not only for her brother but for her friendships.

When LVP arrives at the restaurant, the packages are a little dinged up from the drive. As Denise peels off the paper, Lisa reflects on her time with Denise. She thinks the newest Housewife has kindness and authenticity, so unlike the other women on the cast.

Denise tries to tell Lisa that the other women care about her, but LVP isn’t having it. Kyle called her a liar and refused to believe her protestations of innocence. Say it with me, kids, “Goodbye, Kyle!”

Back at Kyle’s house, she and Dorit discuss the fact that LVP might open up to Denise. Dorit even compares LVP to Charlie Sheen. One’s an animal lover, and one’s a sex addict, but Kyle points out that they’re both self-absorbed Virgos, so they have that in common.

Back at Villa Blanca, Denise talks about her refusal to hide out after her embarrassing split with Charlie. LVP says she can’t even explain why she needs to separate herself from the ladies, but Denise sees this as a sign of weakness. LVP should try to repair her friendship with Kyle, at the very least. Lisa has no regrets about cutting Kyle and the rest of the women out of her life. Not one to give up, Denise invites Lisa on the RV trip. Lisa isn’t the slightest bit tempted.

Meanwhile, Kyle can’t keep Lisa’s name out of her mouth. She thinks Lisa is too scared to face everyone and only surrounds herself with sycophants. Sure, Kyle believes Lisa ratted out her friend in the press, but hey, she still has love for LVP. So much love that she theorizes that LVP will turn herself into the victim. And how dare LVP not hang around and let them kick her over and over, like some kind of skin-covered soccer ball?

Dorit continues to claim she did nothing wrong and insists they all must talk about what happened. Kyle complains about how hard it is to be friends with LVP. They’re interrupted from their gossip sesh when Jagger declares he has to pee. Kyle tells him to pee against a tree. Jagger takes her up on it, then we see a flashback of Kyle bitching at Brandi Glanville for letting her son take a leak outside the pool at Adrienne Maloof’s house. Apparently, Kyle has changed her tune on the subject.

At Teddi’s house, Erika and Rinna show up. The women are ready to see Boy George in concert. While the nanny sits at a tiny table with Teddi’s kids, the ladies fuel up on champagne. When they glance out at Teddi’s yard to see her mechanical bull, it reminds Erika of her grandmother’s funeral. Erika and her cousins remembered Grams by writhing on a fake cow.

Camille and Kyle (in yet another hat—Goodbye Kyle’s fedora!) arrive. Camille is still upset over Rinna’s tough stance on the Kavanaugh hearings. But tonight isn’t about politics. Nor is it about placating kids. When Teddi’s son throws himself on the floor and screams at her for leaving him, Teddi enlists her husband’s help and heads out.

At the Greek Theater, PK teases Dorit about his earlier phone call with Ken Todd. LVP’s husband says Lisa has had it with the women. PK reminds him that he’s not a woman, and neither is his wife…or something like that. They may have lunch soon. Maybe.

On the bus to see Boy George, Erika regales the women about her concert success, Rinna says, “Wooooooooooow.” Exactly. Teddi diverts the conversation away from Erika to say she sent a text to LVP. Teddi wants to move on and coexist. Camille is still disappointed that Vanderpump didn’t attend the bridal shower. Kyle, in her solo interview, accuses Camille of sitting on the fence. But Camille refuses to take sides. She has no beef with LVP.

Backstage the ladies greet Boy George. His hat is practically identical to Kyle’s, and that’s not a good thing. He tells the women Billy Idol is in the house. When PK is sent to fetch the British rocker, George wonders where Denise is and says Vanderpump’s absence is just downright rude. Even though she wasn’t invited.

But Vanderpump has better things to do. She’s whispering sexy talk to one of her dogs while combing its fur. Excuse me while I stifle a yawn.

Dorit tells the women that PK and Ken have made contact. Kyle’s eyes widen as hears the story. Can PK get through to LVP? Gee, Kyle hopes so. She’s so distraught that Lisa is missing out this season. Uh huh.

A sexy, aging Billy Idol steps into the room. The women are all agog. He’s dating actress, China Chow, who recognizes Teddi from her hostessing gig at Mr. Chow. (Not related.) Small world. But not small enough that Billy Idol ever saw Culture Club perform live. Rinna is beyond excited that the two rock stars are together in one room.

Denise is at home with her sweaty husband. After dinner, she talks about Charlie wanting to reduce child support. Denise, who didn’t have a prenup, has been dealing with her ex over finances for thirteen years. Look, she’s not a greedy whore, she just wants a cool 55k a month. Is that too much to ask?

Drunk on margaritas, Kyle is a dancing fool during the concert. Camille is amazed that the group is getting along so well, and Dorit is thrilled the girls can all share this night together. But how long can this feeling of sisterly peace last? Mmm, about another five minutes.

The ladies head backstage to see George. Kyle worries that if she were up on stage, someone could hurt her. PK states that since Kyle can’t even get along with her best friend, she might have some trouble in a crowd. PK says he’s joking. Kyle isn’t amused, especially since PK and Dorit have been kicked out of LVP’s inner circle, too.

Kyle isn’t happy that PK is trying to mend fences with Ken. The ladies head out to the bus, grumbling all the way, as Dorit tries to explain to PK that he hurt Kyle’s feelings. He doesn’t seem to care. Outside, Kyle is holding court when Dorit joins them. And while she’s sensitive to Kyle’s feelings, she has to defend her husband. Teddi throws out her opinion, which Dorit quickly shuts down. Teddi gets offended, then starts yelling at Dorit. Camille takes Dorit’s side, thinking Teddi should mind her own business, for once. 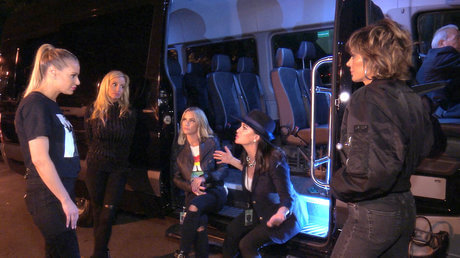 Kyle claims her falling out with Lisa was over Dorit and Teddi. Dorit reminds Kyle that the two women have their own history, and that’s what their argument was about. 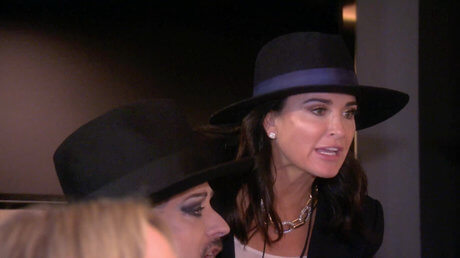 These ladies can’t stop talking about Lisa Vanderpump. Even when not filming, she’s the focus of their conversation. In my opinion, this leaves too much room for Kyle to become the HBIC. We need some of that LVP snark to even things out.

What are your thoughts?