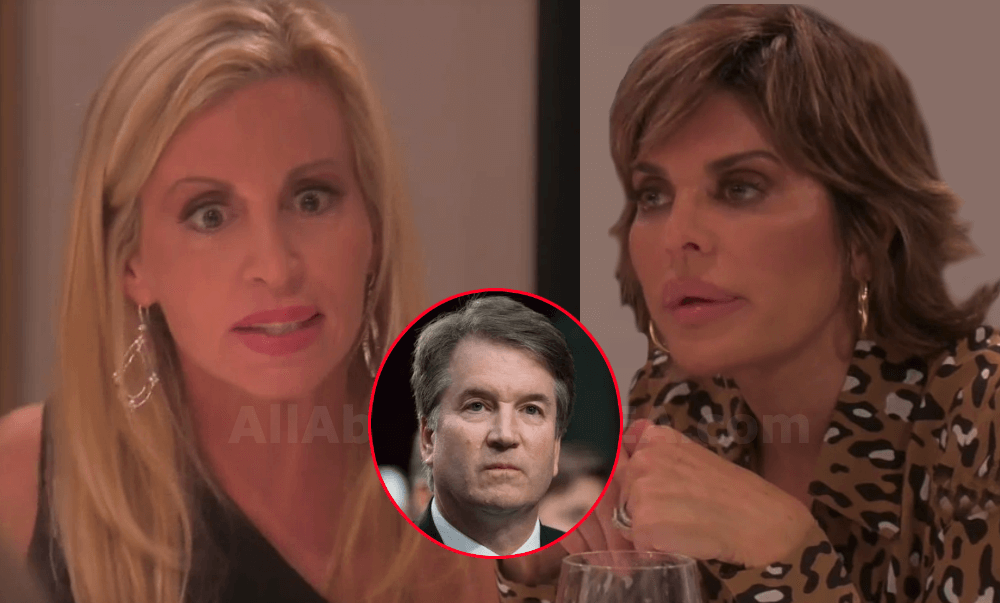 The beginning of Tuesday night’s Real Housewives of Beverly Hills episode opens with Denise Richards hosting Dorit Kemsley at her beach house. Knowing that Dorit won’t actually touch food, Denise still puts out a small spread and pours on the booze. Denise thinks Dorit is “sweet, warm, and engaging.” Has she watched the two previous seasons of this show?

Anyway, Dorit Kemsley shows up wearing head to toe denim, and Denise shoves a glass in her hand before she can even sit on the one blanket in the house that isn’t covered in dog hair. No, Denise! Do not mention dogs in Dorit’s presence or we’ll have to hear about puppy-gate yet again.

The women agree that having kids is a juggling act. Being a working mom is hard work, y’all! (The mothers who don’t have nannies, assistants, and chefs would totally agree!) Then Denise gets right down to it: what’s the story with Lisa Vanderpump? Dorit says she and her hubs, PK, haven’t spoken to LVP since Denise’s wedding, and while she makes a show of mourning their friendship, she maintains that LVP planted the Radar Online article. Next, she complains that Lisa tried to cover her tracks by defending Dorit on TMZ. And even worse? LVP hasn’t called Dorit to see how she’s holding up under all the scrutiny on social media. The nerve! Dorit asks, “If you have nothing to hide, why hide?”

Denise commiserates about being in the public spotlight. She found out who her real friends were during her divorce to Charlie Sheen. Dorit sympathizes and wants to go back to trusting LVP, but both women agree it’s going to take a long time to get there. They end the afternoon by strolling on the beach.

Over in Kyle Richards’ world, she’s putting together a wedding shower for Camille Grammer. Kyle lectures us on the importance of place cards and why the women of Beverly Hills get their (surgically reduced) noses bent out of joint when they’re not seated properly. Kyle even makes a place for LVP, whom she hasn’t seen since their big fight. We’re then treated to a flashback of Lisa defending herself from leaking the dog story.

Over at Villa Rosa, Lisa’s kitchen is being ripped apart, leaving wires and drains exposed. Still angry at Kyle’s accusations, Lisa pounds on the cabinet studs with a hammer. More flashbacks, where Lisa boots Kyle and her stupid hat out of the house. I could watch that on a loop for hours.

With her cleavage up to her chin, Kyle welcomes her shower guests, including Faye Resnick, who worries that wearing white to the shower will upstage the bride. Lisa Rinna arrives in her usual leopard print dress. Teddi Mellencamp, Denise, Camile, and Dorit stroll in, doling air kisses to all.

Meanwhile, Erika Girardi speeds along the streets of Los Angeles in her sexy sports car for tour rehearsal. She’s so busy, she has no time for anyone else, even Camille and her latest marriage. Erika tells she dreamed of being a big star, and once she turned thirty-five, she (and her husband’s millions) made those dreams come true. And all is going well until she gets kneed in the face by one of her backup dancers. Whoopsie. Erika assures us she’s tough enough to take a hit. Even while she’s blaming her dancer and complaining to assistant, Mikey, that her neck is messed up.

Back in weddingland, Camille opens her gifts, including a tiara. Dorit soon drops the news that she spent the previous evening with Kathy Hilton, Kyle’s sister. Kyle’s whole body froze — not just her face this time. Kathy’s name appears to make Kyle deeply uncomfortable. But, she admits, she’s finally mended fences with her sisters. Rinna reminds Kyle that since her TV show, American Woman, got canceled, her sisters can put aside their hate and break bread. After all, nothing reinforces a sibling bond like the sweet smell of failure.

The women go to work on their salad and talk about the absence of LVP. Why, oh why, didn’t she attend the shower? Camille feels she’s being punished by Lisa, when LVP is really angry with Kyle. The women question if Lisa will attend the wedding. Rinna calls LVP a pussy for not showing up to film. Camille remembers when LVP gave her a stiff upper lip speech during her divorce to Kelsey Grammer. Why can’t Lisa just rise above it, too?

Kyle and daughter, Portia, decide to take a spin in a three-wheeled car called a Vanderhall. Basically, it’s a really expensive go cart. They make a trip to the grocery store and, in an effort to make Portia more independent, Kyle allows her to pick up a few items on her own. Portia, like any smart pre-teen, fills up on chips. Kyle, not realizing how small her car’s storage capacity really is, has to put back a giant sack of potatoes, though we all she’d never eat them in a million years, because carbs are the devil.

Rinna, her daughters, and her mother, Lois, stop by a spa devoted to intravenous vitamins and cryotherapy. Hooked up to banana bags, Amelia says the vitamins taste like pee. Then she mentions that Harry Hamlin is glued to the TV. Rinna reminds us that Brett Kavanaugh is testifying before congress. Putting her disgust of American politics aside, Rinna strips and hops into the infrared bed. Amelia and Delilah head into the cryotherapy room, wearing towels, ear muffs, socks, and mittens in the -140 temperature.

The women all gather for dinner along with Rinna’s mom and her daughters. Denise and Rinna discuss how shy Delilah and Amelia used to be. The girls are now so outspoken, they only stay for a cocktail, then ditch the older women as fast as possible. When Camille states that she texted Lisa Vanderpump to say how they all missed her, LVP said she hadn’t been invited to the shower. Kyle’s so shocked, her boobs nearly pop out of her one-sleeved dress! Of course Vanderpump was invited. Kyle shows that a birthday text was delivered to LVP. There’s your proof! Lois claims it’s all bullshit.

Once more, Rinna talks about the Kavanaugh hearings. Rinna is firmly anti-Kavanaugh. Camille has the opposite point of view. The women get in a heated argument. Camille has been a target of unfair treatment. Remember season one of RHOBH?

“I am very empathetic to women who have had this, but I’ve also been accused of things that I’ve never done,” Camille said. “This pisses me off. … When I went through my divorce, I was taken down. I was maligned. I was emotionally beaten down. It’s horrible to go through that when you’ve done a lot of good things in your life.”

She continued: “I empathize with what Brett Kavanaugh is going through. I’ve been in that position. I know what it’s like to be wrongfully accused and humiliated all over the world for lies. … It feels horrible to be in that position. I’ve been the victim of a smear campaign and it hurts.”

We’re treated to a flashback of Camille comparing herself to Jesus. Kyle tries to change the subject, and eventually Rinna toasts her mother for being ninety-years-old.

Down in the main restaurant is Kyle’s sister, Kim. Rinna yells across the room and waves, while Kim ducks behind the menu. We get yet another flashback, this one of Kim ungifting the bunny Rinna had given her granddaughter. On the restaurant stairs, Camille is breaking down in tears about her own victimhood. Kyle pulls her out of it, and Camille is so touched, she asks Kyle to be a bridesmaid. Kyle complained about Camille’s delivery, but what the hell. She’s in! Any chance to do the splits, right?

Denise and Dorit leave the restaurant while the rest of the women gather around Camille, giving her pep talks and hugs. As Kyle dashes to talk to Kim, her other sister, Kathy, also pops up out of nowhere. They share a group hug as Kyle cackles.

Now that party has broken up, Lisa Rinna walks right by Kim without speaking, saying she doesn’t give two shits about the elder Richards sister. She hasn’t gotten over the bunny incident, and she never will!

The next day at the Hamlin household, Rinna and Lois talk about when Lois herself was attacked by a man she worked with. He drove her down a dark road, beat her with a hammer, and tried to rape her. She was saved by a military police officer. The perpetrator spent time in prison, but once he got out, he killed 16-18 women. Lois was left with metal plates in her head from the attack.

Wow, we really ended up on a very serious, sad note. I really like Lois. She’s plucky and tough. I could use a little more Lois in my Real Housewives of Beverly Hills.

So, do you think Lisa Vanderpump was wrong to stay away from the shower? And should Rinna have greeted Kim or was it okay to freeze her out?