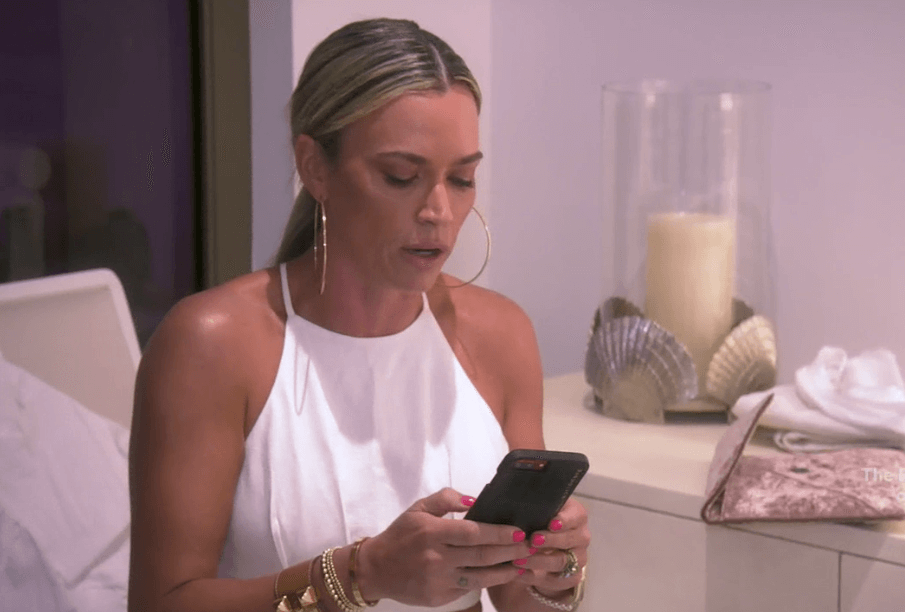 We are in the beautiful Bahamas with The Real Housewives of Beverly Hills , still completely submerged in #Lucygate. Brace yourselves, people, it’s the storyline that never ends. There are three schools of thought. Teddi Mellencamp, Kyle Richards, Lisa Rinna, Erika Jayne, and Dorit Kemsley think Lisa Vanderpump is manipulating the situation to make Dorit look bad. Second school of thought is Lisa thinks this wouldn’t be an issue if Dorit had just returned Lucy and not regifted her like last year’s hand bag. And third school of thought is Camille and Denise don’t understand why the ladies can’t move on. They are the smart ones.

Today the cast is either shopping, golfing or snorkeling. But first, they blend daiquiris by riding stationary bikes. Rinna thinks this would be very successful in Los Angeles. Maybe once, but we all know the women would make their assistants do it for them.

First up, Erika and Teddi are golfing. Turns out Erika can play, but Teddi cannot. Teddi looks like she’s chopping wood and Erika’s shorts keep riding her ass. These ladies will probably play three holes at most. 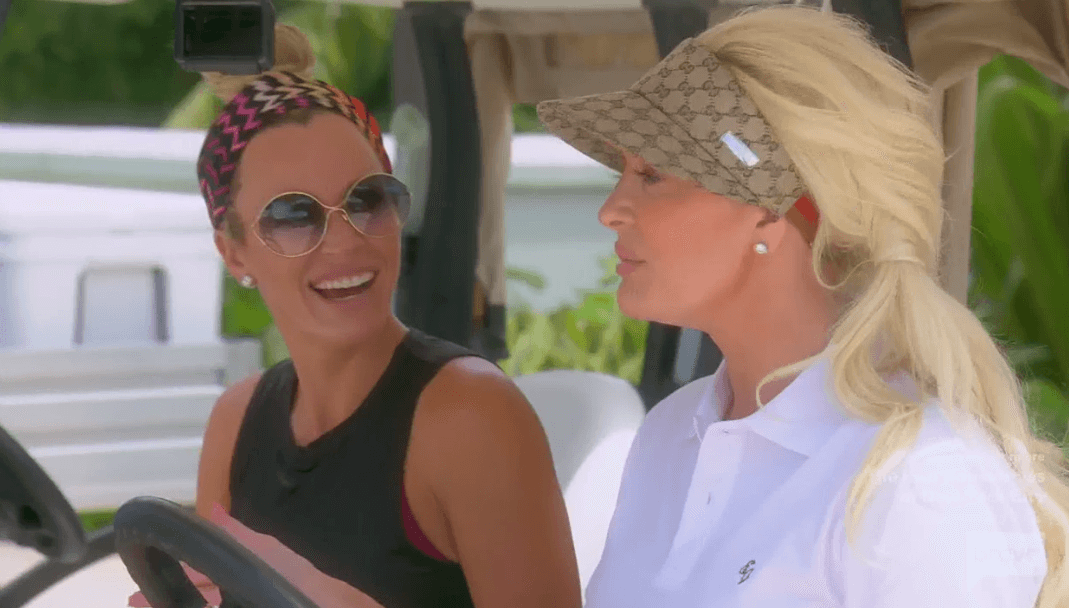 Next we check on Dorit, Rinna, Camille Grammer, and Denise Richards on the boat as they go snorkeling. Denise tells Dorit she doesn’t get what the fuss is over #Lucygate. And she’s not alone. Dorit explains that Lucy is the second Vanderpump Dog that didn’t work out for her. Once upon a time there was Maddie. Camille feels that Lisa was probably upset because Dorit didn’t call her prior to giving Lucy away. Dorit says no. It’s not about that, but doesn’t say what it’s about. Rinna jumps in and says it’s bullshit that Lisa has created this turmoil for her own purposes. Kind of like what Rinna is doing now. 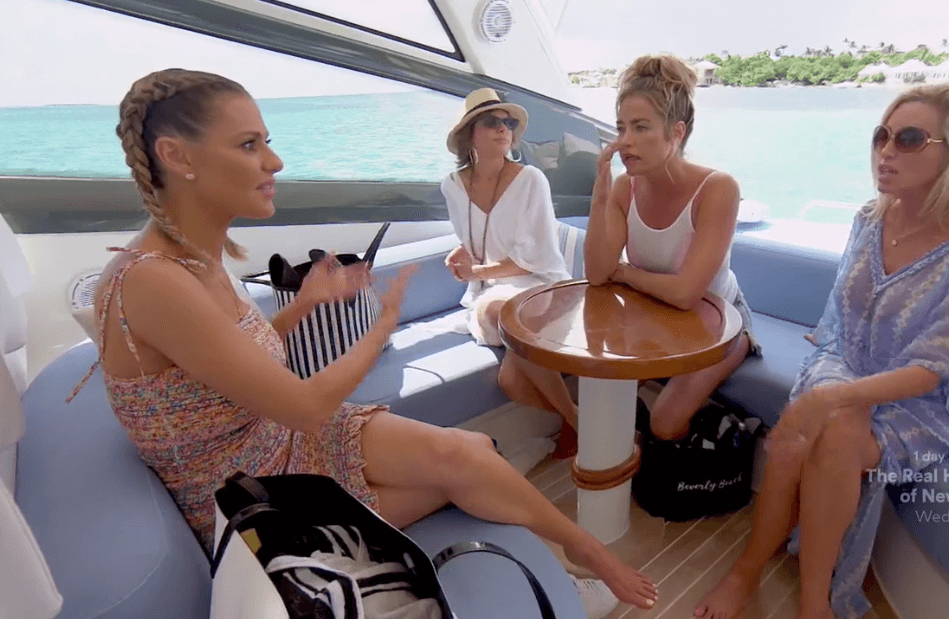 Lastly, we check in on Kyle and Lisa on their quest for retail therapy. They find lots of sparkly stuff. Kyle tells Lisa that last night was a bummer, Rinna made it worse, and that’s why no one ate their food. WTF? Lisa purchases a sparkly drape while Kyle holds out for a Rolex.

Back with the golfing girls, Teddi whines to Erika that she is the real victim, not Lisa whose brother died three months ago. Teddi claims that Lisa is pitting her against Dorit. Erika agrees this sounds like a well-orchestrated plan. Teddi says Lisa’s employees at Vanderpump Dogs were told to tell her about Dorit’s dog going to a kill shelter. Erika advises Teddi to pull out the proof, and she should know, she’s married to a lawyer whom she speaks to on the phone for all of ten seconds. 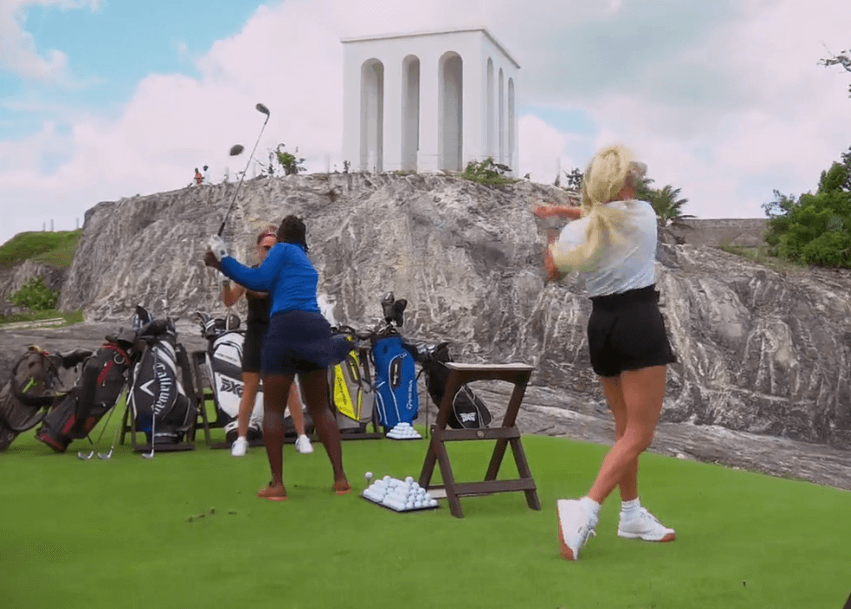 Back with the snorkeling quartet, it’s a bust. No turtles, no coral, no fish, no nothing. The women give up and get back on the boat. Rinna is still carrying on about how Dorit is the real hero of the story to have the courage to return not just one dog, but two. Rinna recommends Dorit tell Lisa to eff off. Then Rinna dances a jig and Denise recommends she not fall and break her neck.

Kyle and Lisa are now having lunch in a cabana by the pool. Kyle tells Lisa that Teddi feels set up. Lisa denies this. But this is where it gets confusing. There are two John’s. Blizzard and Sessa, so let’s just combine them into one. Lisa spoke to John on the phone who sassed her that she doesn’t control what he says. No siree. Kyle is having trouble following along. And she’s not alone. Then little puffy flamingos show up and you know Lisa probably wants to order a dozen for Villa Rosa. 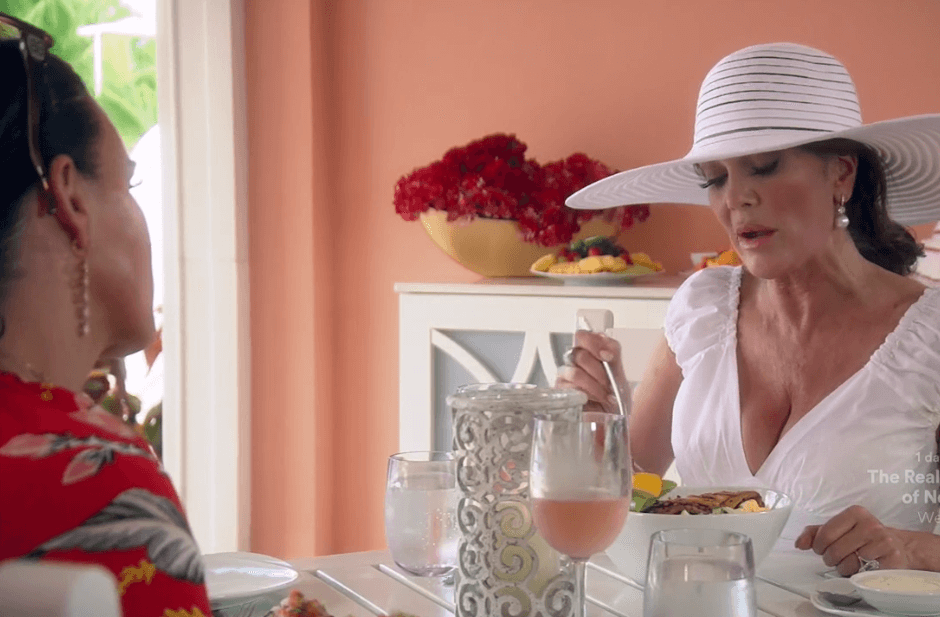 Before dinner that night, Lisa phones Teddi and asks her to come to her room for a chat. Lisa is wearing a sparkling gold top with matronly flair. When Teddi arrives she asks/hopes/requests if she will be getting an apology from Lisa. Nope. Lisa doesn’t understand why Teddi thinks this was a set up. Teddi pulls out her phone and shows her the text from John. It implicates Lisa. Lisa says she doesn’t even have this John’s number, but Teddi storms off and tells Lisa to get her story straight.

Teddi walks through the suite, calling out Dorit’s name. Dorit appears in her bathrobe, though her hair and makeup are perfect. Teddi tells Dorit she refuses to be Lisa’s pawn to get at her. You know the term: shit eating grin? Well, Dorit has it on her face. She thanks Teddi for her honesty. Lisa shoots Dorit a glare. She tells Dorit she didn’t involve John. Dorit says she’d like to get dressed so she won’t be late for dinner, because you can call Dorit many names, but don’t call her late for dinner. 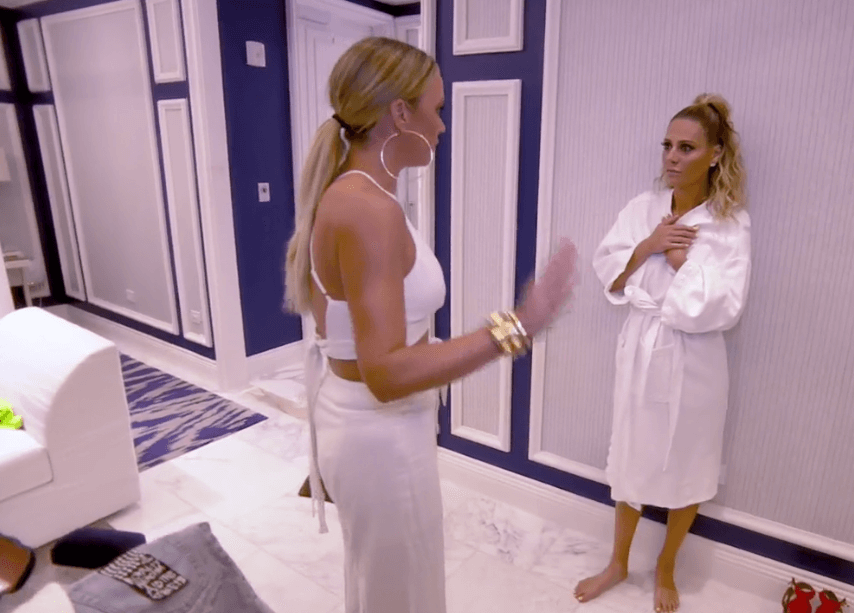 Kyle calls Mauricio to get his approval to buy one of the two Rolex’s of his choice to replace the stolen one and because it’s tax free so it totally makes sense to drop over ten-grand in the Bahamas. Teddi knocks on their door because she forgot her key. She tells Kyle she went to Lisa’s room expecting an apology, but only got excuses, so she now has to go to dinner with a fake smile. Will she, though? We’re all betting on Teddi’s dramatic moment for the cameras. 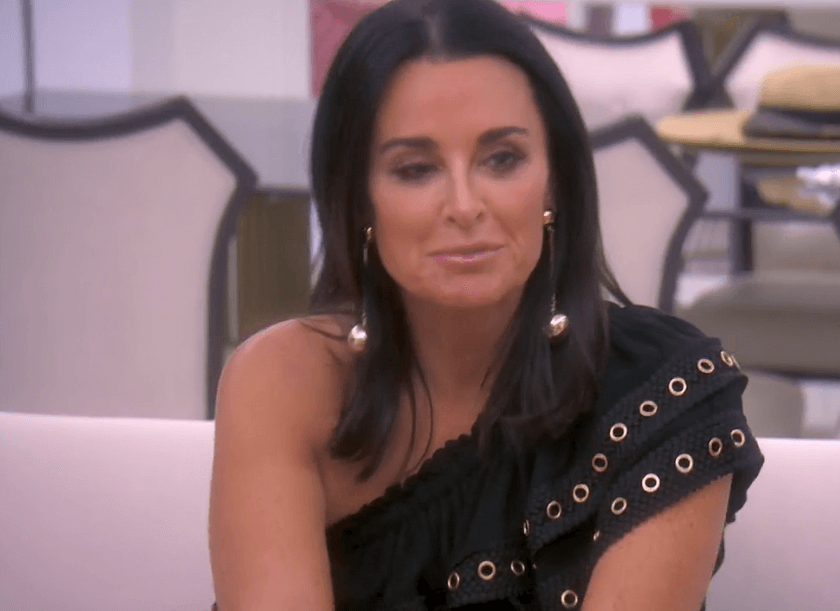 So it’s pretty clear nobody’s going to eat dinner. Again. And Teddi is either glaring at Lisa or icing her out. Dorit thanks everyone for coming to the Bahamas, and they thank her, especially Rinna, for a fabulous time. Someone asks Teddi if she had a good day and that’s the only encouragement Teddi needs to declare victimhood. She says she’s not going to sugar coat things because she’s not a fucking fake and this whole thing makes her feel yucky.

Dorit tells Teddi she totally understands and believes every word. Dorit says nothing to Lisa. Rinna jumps in and wants to know why this is happening to Teddi Cougar Mellancamp. Seriously, can these women just order some damn food and move on? Lisa gets up from the table, thanks everyone for the trip, and walks away. Dorit feigns shock as she whispers, Don’t go, Lisa.

Kyle follows Lisa to the long and lonely bridge and tells her not to leave, but Lisa does anyway. Now that Lisa’s gone, Teddi shows the ladies the text.  Rinna tries to get Kyle to turn on Lisa and it almost works. Kyle says, This is how Lisa is and I love her anyway. Rinna is ready to behead the queen. Camille reminds everyone that at different times they have all owed each other apologies. Thank you voice of reason! Erika tells Denise she’ll give her $1,000 to knock on Lisa’s door and get her to admit she fucked up. Denise ain’t no fool – besides being married to Charlie Sheen – and she doesn’t need a $1,000, thank you very much. Thank God the Rolex arrives because shiny, blingy shit is the only thing that can shut these women up.

Kyle and Lisa leave for the airport at 4:30 in the morning. Clips are shown of the girls’ crazy night of drinking and dancing and falling down drunk. Kyle only got two hours of sleep and if she hears another word about #Lucygate from Lisa she’s going to hurl.

The following morning, the rest of the ladies meet for breakfast. More clips are shown of their crazy night, Rinna scissoring her legs, and everyone taking shots. Dorit’s glam squad got up extra early to make her look fab. She tells the ladies there needs to be some ownership on Lisa’s part – never mind what Dorit did – but Lisa has some ass-kissing to do if Dorit’s ever going to trust her again. 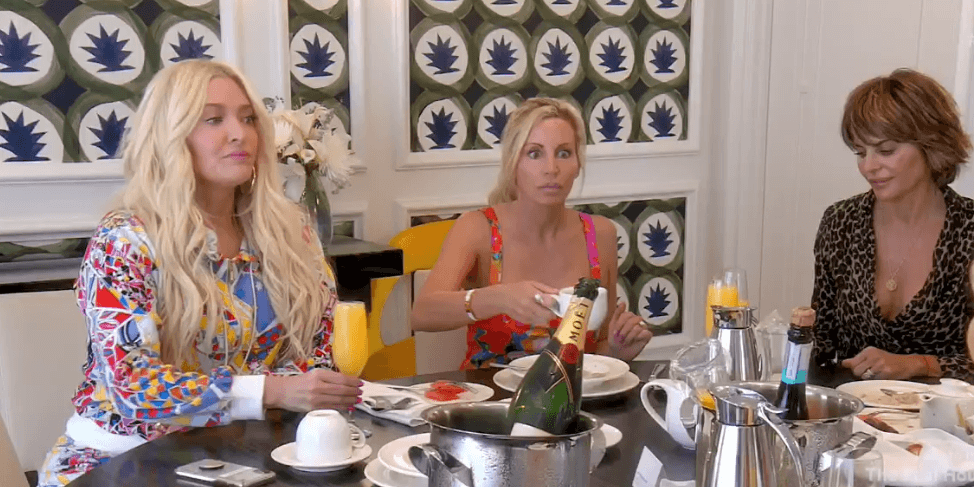 Back in the BH, Lisa has never been so happy to see Ken. He comes baring his own proof. Ken got John to print out the texts from Teddi – all of them. Holy shit! It’s a game changer. The texts implicate Teddi! Duh-Duuhh-Duunnhh. 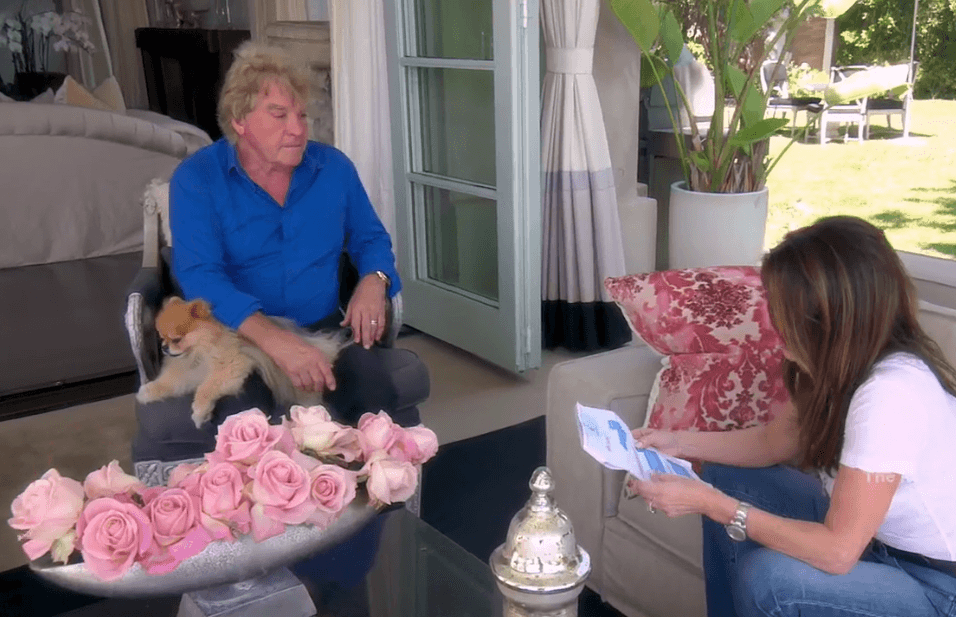 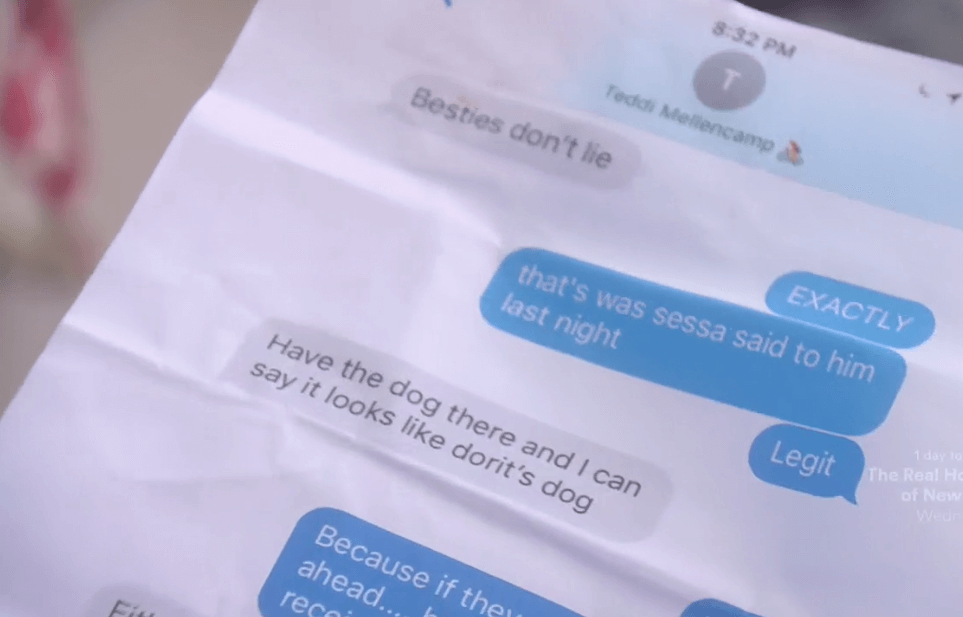 Next week on The Real Housewives of Beverly Hills — Kyle takes her daughter to college, Denise plans a wedding, and Teddi gets accused of lying by omission. The question is: will #Lucygate ever end?