This week on Vanderpump Rules we learn the psychological term: reptilian brain. I’ll save that fun for later, first we check in with James Kennedy who is trying to get the guys together for a round of golf. He’s in a cheeky mood because Lala Kent and Randall have broken up. However it’s James’ prediction that Randall will eventually buy back Lala’s love. 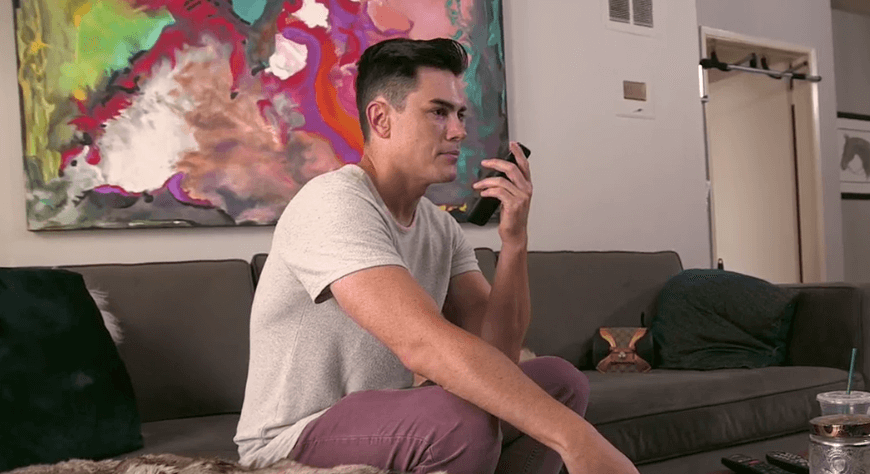 Next up we visit Jax and Brittany. Brittany is planning a girls’ group hug for Lala to help cope with her breakup. Vodka in baby bottles should do the trick, right? Turns out Lala doesn’t need to suck baby bottles, she and her man have already reunited and it feels so good. Plus Randall gave Lala her Gucci shoes back so that totally proves his love.

Lala is excited about the premier of her new independent horror movie, The Row, produced by you guessed it, Randall. Lala apparently is playing the part of the prude – so no type casting was involved. 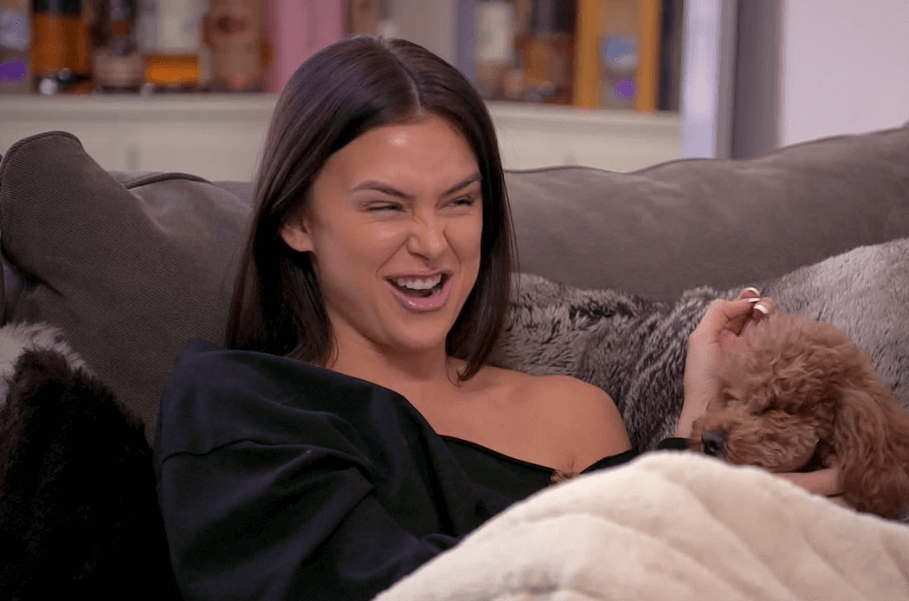 We stop by Vanderpump Dogs where Stassi, Beau, and Schwartz stop by to get their dogs groomed. Stassi updates Lisa about the girls’ trip and how Kristen turned into Satan. Lisa says she’s sorry things are not working out between Kristen and Carter because he’s been the most stabilizing influence in her life thus far. Stassi is like, What world are you living in? Changing subjects, she tells Lisa that Beau’s mom is coming to town and will conduct a group therapy workshop. Won’t that be fun! Lisa tell Stassi not to screw up this first meeting with Beau’s mom. 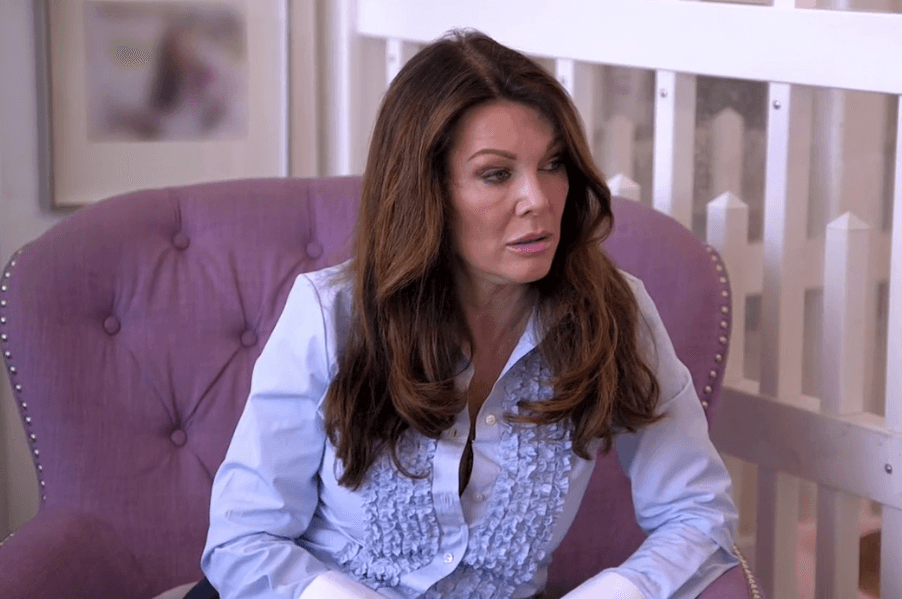 Ariana and Tom are discussing home ownership versus renting. For Ariana, growing up means buying property. For Tom, it means having babies. Ariana turns up the music on her headphones so she doesn’t murder Tom while he’s pouring his heart out. Ariana doesn’t want kids because she says they’re gross. Sandoval makes the mistake of telling Ariana that Jax has been asking if they want kids. This makes Ariana roll her eyes because, seriously, who cares what Jax thinks. 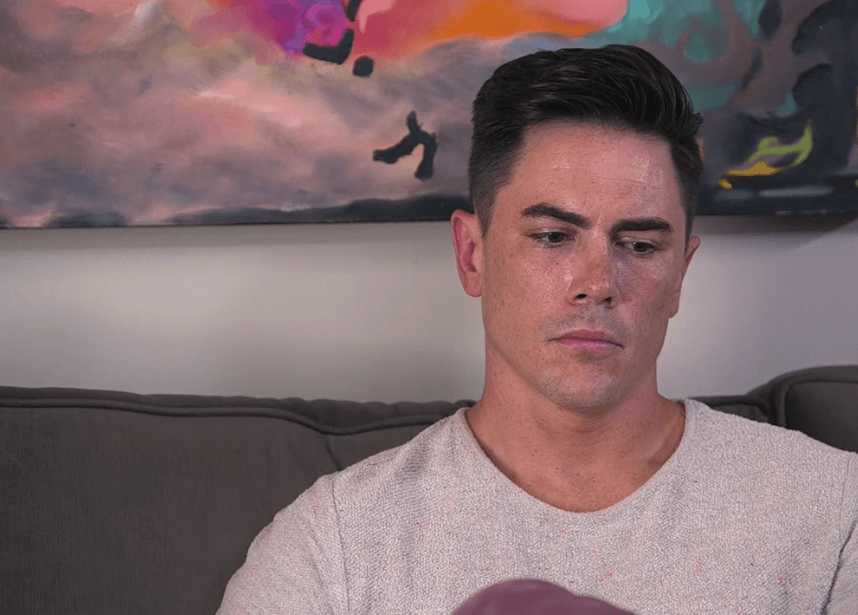 Over at SUR, Lala can’t concentrate on her hosting duties because she’s focused on walking the red carpet the following day. She’s worried she’s not a great screamer, but Katie assures her she is because she’s heard her. While taking a break out back, Jax gets a call from James about playing golf. Even though he doesn’t like James, he likes having James pay his green fees. Jax agrees to go. 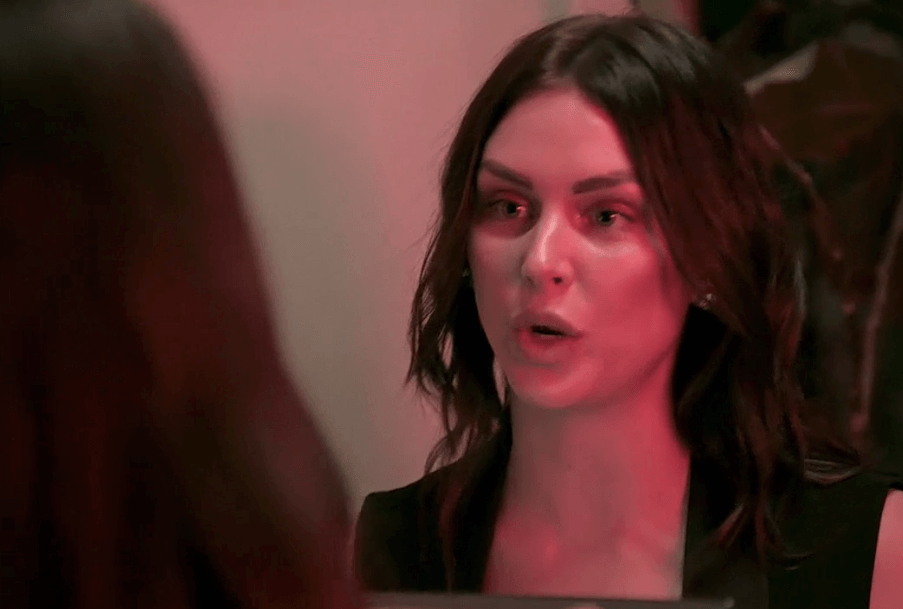 The following day Lala and Stassi are getting their hairs did for the premier. Lala regales the story of how she first met her man at SUR. After her first “audition” for Rand they banged it out. Stassi’s mouth is on the floor, but she manages to ask Lala if her vagina is made of sparkles when she learns she got a Range Rover after using the classic line, “Does Daddy want to play with Lala’s asshole.” 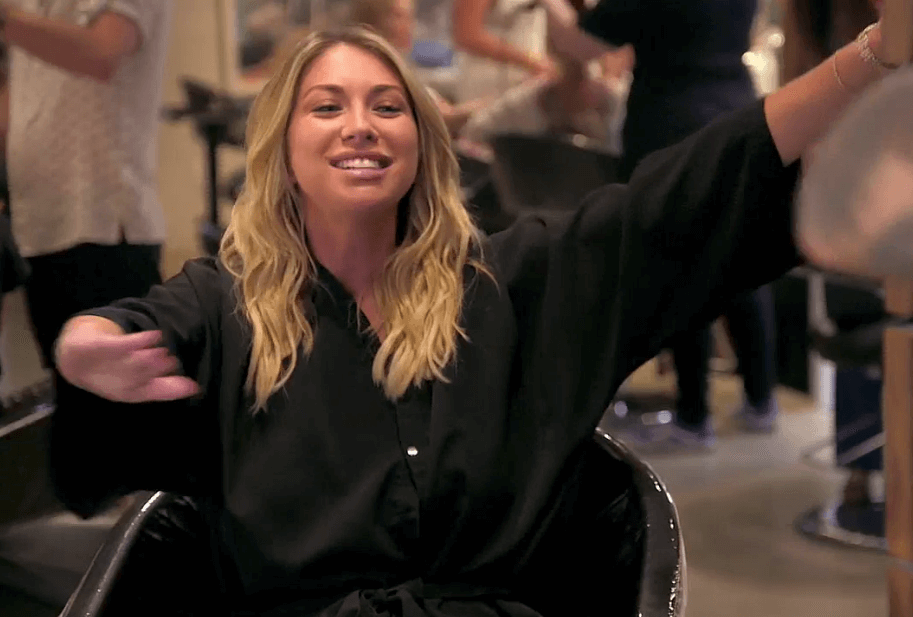 It’s time for golf! Or as Jax calls it, four hours of James’ desperation to fit in. He’s right. James doesn’t like golf, but he’ll do anything for these guys to put in a good word with Lisa. Sandoval tells the guys to stop talking to Ariana about having kids because the “giving birth thing” freaks her out. Sandoval explains he would give birth if he could, and I believe him. Schwartz recommends giving Ariana an ultimatum, then says he’s kidding, then says he isn’t. 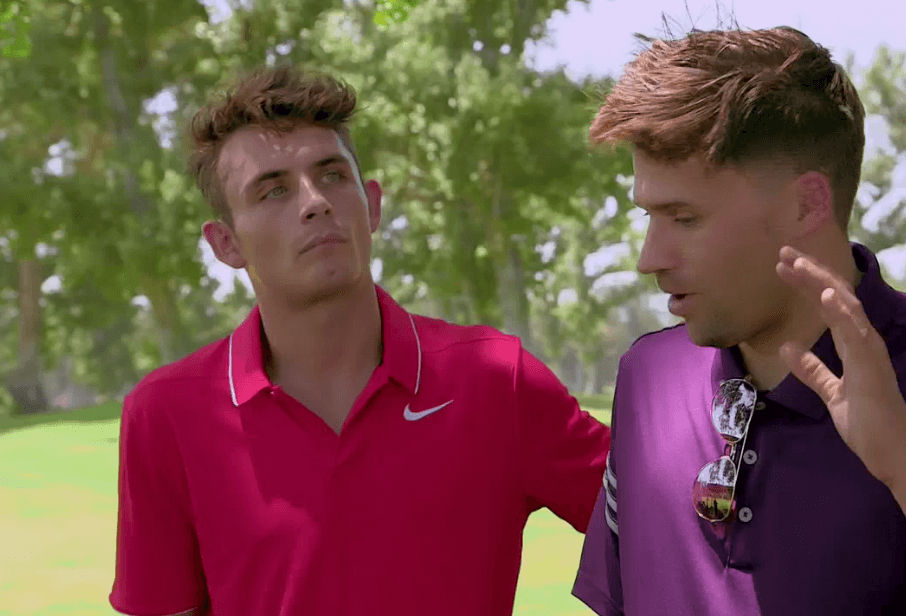 We join the girls three hours after Lala’s movie premier. She’s not with them because she had to go bang the producer. They discuss the college sorority, slasher movie and how Lala was the best. Then they ask Kristen how she and Carter are doing and apparently they’ve had a lobotomy because everything is great now. What’s changed? Carter is now carrying his weight financially. No one believes this. They tell Kristen to get woke because Carter’s mean, they don’t have sex, and he steals her credit card. Kristen says she wants to marry Carter because she’s getting old, which is a terrific reason to marry, right up there with because no one else asked. 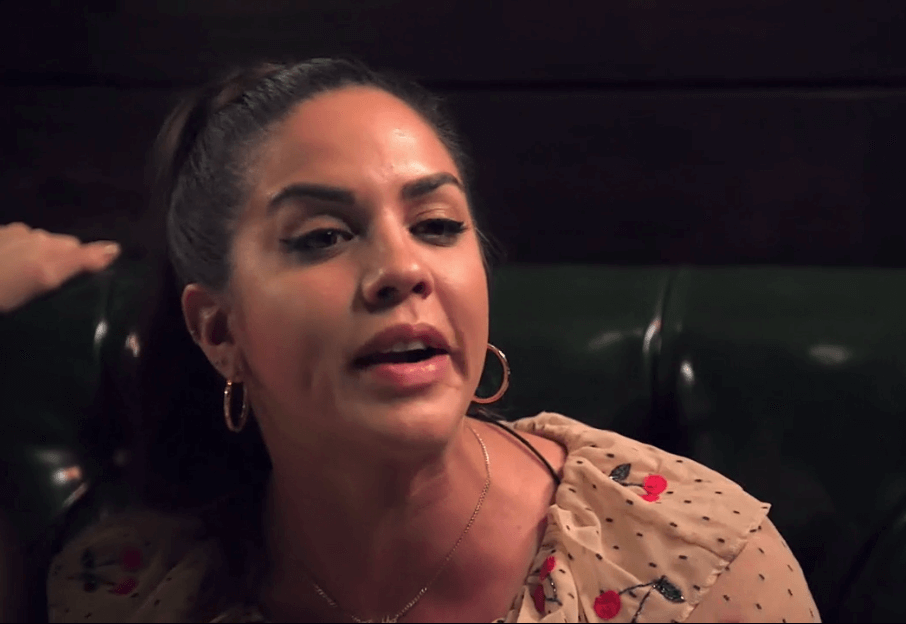 It’s time for Stassi to meet Beau’s mom, Isa. Stassi shows up to the Malibu restaurant with a gift so they are off to a great start. Isa tells Stassi that physical beauty doesn’t move her son like personality does. Umm, okay. Beau tells his mom that Stassi is his best friend, but he must pee, so please don’t embarrass him while he’s gone. He leaves his phone to record the conversation. Isa and Stassi have a bonding moment over their love for Beau. Stassi thanks her for raising such a wonderful son. Beau is pleased with the recording.

That night at SUR, we learn Brittany is having all four wisdom teeth removed the following day and hopes Jax will take care of her, unlike last time when he ignored her. The Toms are there and Lisa asks if they’ve signed the terms agreement they asked for. The Toms say their lawyer is still reviewing it. Lisa tells the Toms they are opening in 10 days so they had better hurry or the club could be called Jax/James – an empty threat if we’ve ever heard one. 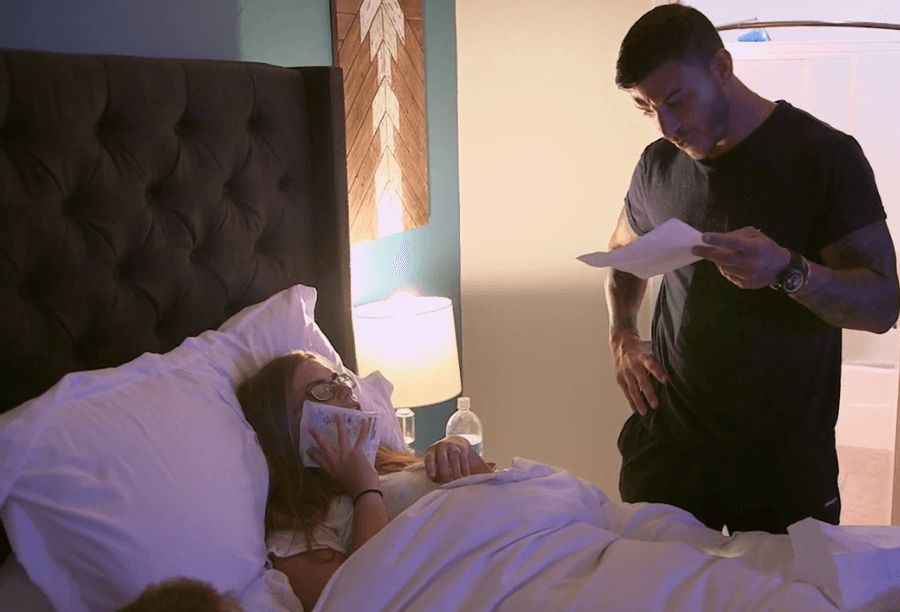 Ariana and Katie are checking on Brittany post-op. She’s sleeping so they chat with Jax and Schwartz. Jax says he will not be attending the therapy workshop because he hates therapy doesn’t want to leave Brittany’s side. Jax apologizes to Ariana for mentioning kids. This makes Schwartz need his inhaler. It’s like fight club. You don’t talk about fight club. The apology turns into a lecture and Ariana wants Jax to get out of her barren vagina.

Over at Kristen’s apartment, she’s getting the booze ready for the therapy workshop because she will need it the most. After everyone arrives we learn today’s lesson is how to handle emotional triggers. More shots! But seriously folks, the problem humans have with relationships is the reptilian brain – it’s only concerned with who lives and who dies. Lesson over.

In the kitchen, Ariana tells Tom about Jax and Schwartz’s deal-breaker comments on kids. A. This is news to her. B. There’s the door. C. Don’t bring it up for ten years. Ariana is turned on by their progressive attitude and it gives her hope that she can control her reptilian brain by not chopping off Tom’s head. Of course don’t forget, some mom’s eat their young. 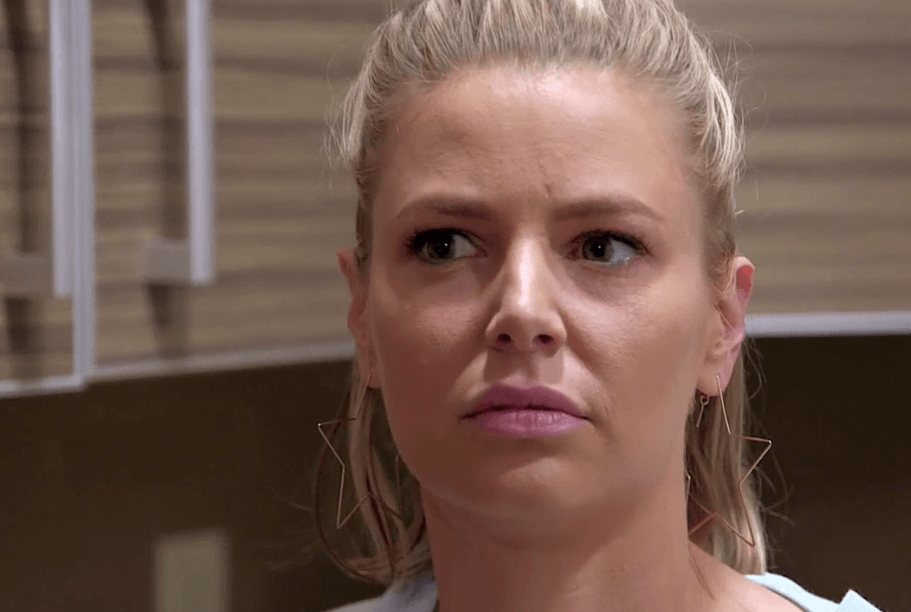 In the bedroom, Carter crashes Stassi and Katie’s girl talk. He points out that Katie and Tom have had their low points and Stassi used to be in a crappy relationship. Stassi tells Carter to look her in the eye and tell her he and Kristen are in an awesome relationship. He can’t. Instead, Carter tells Stassi and Katie they are dicks and why he and Kristen fight. Mmm-hmm. It’s all their fault. Kristen enters the bedroom and tells the girls to stop yelling in her sacred space. 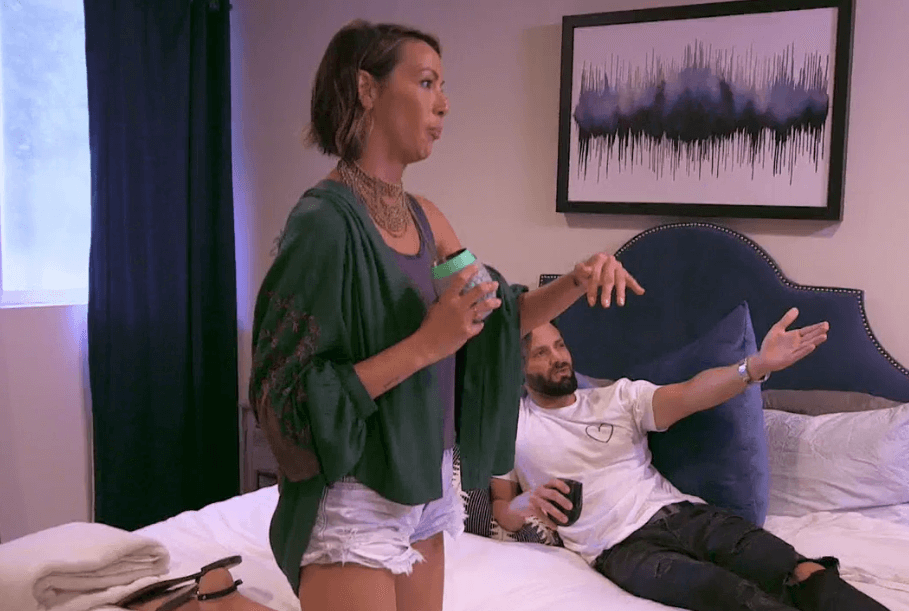 Everyone in the living room is scared to interfere. Katie storms out and Schwartz asks Isa what to do. She recommends letting Katie deescalate. Either way, Schwartz is screwed. Kristen then sages Stassi to cast out the evil spirits because it’s all her reptilian brain can think of. 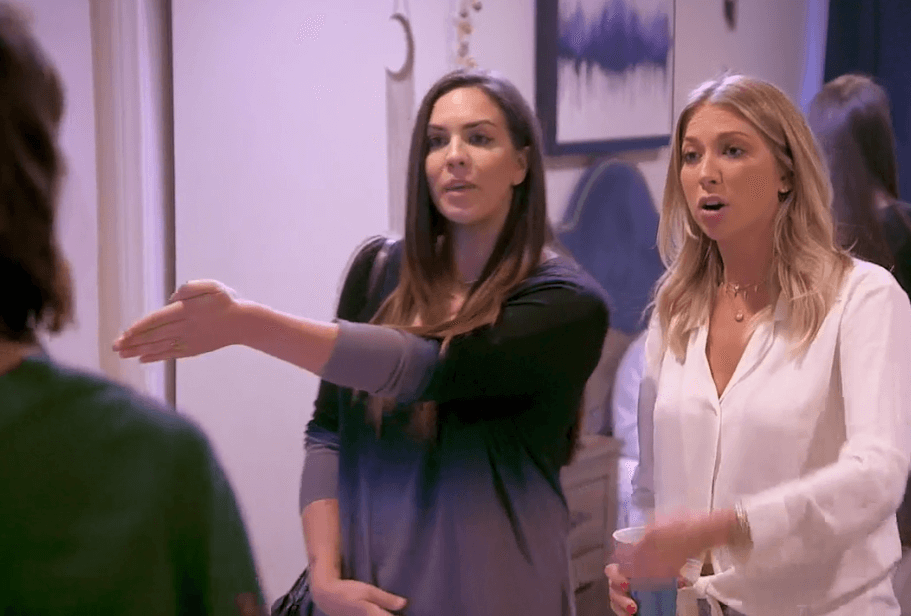 Tune in next time on Vanderpump Rules to see the demise of everyone’s friendships and witness Schwartz’s flower get decorated. Eww.