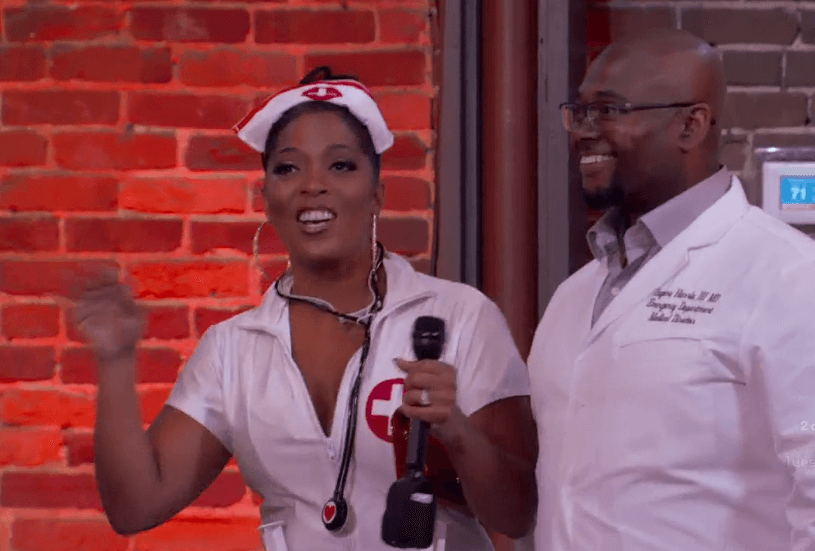 Sunday night’s episode of Married to Medicine picks up at Toya Bush-Harris‘ messy surprise party for her husband, Dr. Eugene Harris, where she shaded the hell out of Dr. Contessa Metcalfe. But last week’s episode was just the tip of the iceberg as far as the drama goes on Married to Medicine this season.

The episode begins with Dr. Heavenly Kimes and Dr. Jackie Walters meeting for an afternoon of paintball and a little catching up. Quad Webb-Lunceford has also been invited but sends Heavenly a last-minute decline — explaining that she has a meeting. The women’s feelings are hurt and they feel neglected as Heavenly points out that Quad is making time for her other friends. To add insult to injury, Quad has been posting photos of herself, out and about with her ‘Sister Circle’ friends.

Over at Contessa’s house, her ailing father is visiting. Just the sight of Contessa’s dad is startling. He’s all skin and bones and appears very sick. As he begins to discuss his health with Contessa, she discovers his status is even worse than she thought. She learns that because of extensive scar tissue caused by advanced Crohn’s disease, medical tests have been inconclusive but his doctor believes he has cancer. Contessa was devastated by the news, particularly after her father informed her that he was refusing treatment until he could get an accurate biopsy.

Over at Mariah Huq’s house, she sits to have a real conversation with her daughter, Lauren, about growing up and getting ready for high school. Lauren’s tired of her “baby-ish” clothes, and tired of  being issued kid’s menus at restaurants. The move from middle to high school is stirring up many emotions for young Lauren — stemming from blossoming into young womanhood. Mommy Mariah affectionately explains to her daughter that many of her concerns will dissipate as time progresses. The attentive mom can relate, she was also physically small when she entered high school. She candidly educates her adolescent on her changing body, birth control and sex. Mariah’s motto is “books over boys,” and Lauren agrees!

Up next, Toya Bush-Harris and her husband, Eugene, have paid off their massive IRS tax debt, and are ready to upgrade their living arrangements to the tune of $2 million. They want to transition into their “forever home.” The couple tours a mega-mansion with 5-bedrooms and a gourmet kitchen but the price tag is not quite within their budget. After the tour, Toya sits Eugene down and reminds him of their prior financial struggles. Previously, he was forced to work extra shifts at the hospital in an effort to get them out of debt. Toya does not want to go back down that road and advises Eugene that they need to look for more modest digs to suit their budget.

Meanwhile, the concern over Quad’s isolation from the group continues to grow. The rumors about her crumbling marriage and husband, Dr. Gregory Lunceford’s, hotel room hook-up, is the hottest topic. The ladies are feeling shut out and deserted amid Quad’s marriage crisis. They want to see her in person to let her know they care, and provide her with a judgement-free zone to open up.

Heavenly is hosting a crab boil in attempts to bring Quad back into the circle of friends. Quad shows up surprisingly. However, everything comes to a boiling point with the women as friendships and loyalties are questioned. Simone immediately calls out Quad for being a selfish friend and reminds her that they’re all busy but make time for their friends. Simone says she’s tired of Quad making everything about her. Watch the tense scene unfold below.

After Simone’s explosion over Quad playing victim, Mariah notices that Quad ran off and left her purse on the table. She attempts to give Quad her purse, but Quad is dismissive and tells her to put it in the van. “Girl, you better come get this purse,” Mariah responds and Quad walks over and rudely snatches it from Mariah’s grip. Quad’s lack of appreciation leads Mariah to say she should have left her purse sitting on the table. Quad then starts yelling in Mariah’s face and brief scuffle ensues. The ladies almost comes to blows before Mariah manages to de-escalate the heated the situation, which prompts Quad to open up to Mariah and Heavenly. Quad then claims the women are not sisterly towards her, which is preventing her from opening up to the group. This sets Heavenly off! Watch below.

Next week on Married to Medicine, things continue to heat up at the crab boil when Heavenly and Mariah’s long-standing feud reaches a fever pitch.