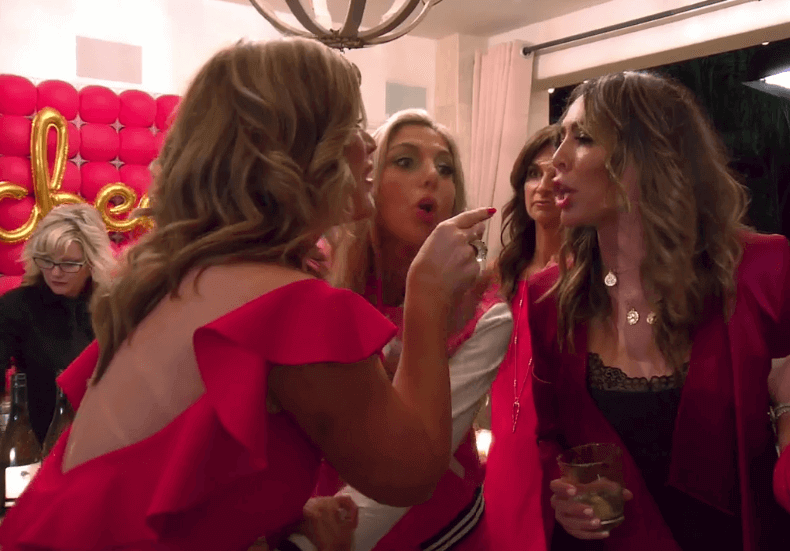 The reality hot-head was outraged by comments Lodge made to an online media outlet, explaining his support of her ex-husband, Michael Dodd.

Fans are divided over Kelly’s outburst, and both sides sounded off on Twitter. Kelly’s behavior nodded to her controversial first season splash — but many viewers are giving her latest tirade a round of applause.

Oh how shitty was Steve to Kelly? That was gross. I hate when men gossip and then talk down to women for putting it on the table. #RHOC

Kelly was the MVP of this party. #rhoc

S*eve L*dge is disgusting. He evaded all of Kelly’s questions and tried to turn them around on her then turned redder than his shirt and made a dash for the door. The way he tried to minimize Kelly was disgusting! #RHOC

I love Kelly! You don’t have to guess what she is thinking! Vicious is about to do the pivot! Kelly I love you!! #RHOC

Why is Kelly calling Emily’s husband a dork the funniest shit I’ve ever seen. ? #RHOC

WOW #RHOC Kelly Dodd is a legend?? and go Emily i’m starting to like her too she’s just stuck with a twerpy husband lol

Kelly’s aggressive approach was slammed by the other side — with plenty of fans calling foul on the reality star’s social backslide.

Emily should have molly-whopped Kelly. And anyone who condones Kelly behavior tonight is probably just as obnoxious as Kelly. #rhoc

ANY woman would have done exactly what Emily did. Kelly was being absolutely vicious. #RHOC

Kelly is so gross and out of control. She looks sweaty all the time. #RHOC

Why is Kelly still on the show? She’s so annoying and dramatic for no reason. Just a vile human being.#RHOC

Kelly is crazy!! Everyone in the world is not going to dislike your ex-husband just because you do!! #RHOC

Okayyyyy, gotta say it. Shane was NOT in the wrong. This was 100% Kelly #RHOC

Do you believe that Kelly’s irate outburst was justified? Team Kelly or Team Steve/Shane/Emily?

Sound off in the comments about Kelly Dodd and Emily Simpson’s fight — and watch The Real Housewives of Orange County, Monday nights, on Bravo.