Welcome back to the ladies of Married to Medicine!

Married to Medicine returned Sunday night and the Season 6 opener delivered in so many ways! We resume after a heavy season plagued with marital problems involving most of the couples. As fans recall, Dr. Simone Whitmore and her husband, Cecil, called off their divorce after the other couples convinced them to save their marriage. The episode starts off with the discovery that Quad Webb-Lunceford’s husband, Dr. Gregory, lied about his hotel run-in with a mystery woman. The young lady has spilled the tea about their raunchy hotel sex romp to a blog — All About the Tea.

All the other ladies are reading the article and weighing on the salacious details that revealed Dr. G may have a pinky-sized d*ck! *clutching my pearls* The news has crippled Quad and Gregory’s already fractured marriage. Quad has moved into another bedroom and not speaking to her husband. They’re living as roommates and the marriage is basically over. Meanwhile, Quad is keeping busy with her new hosting gig on the talk show, ‘Sister Circle,’ and instead of leaning on the ladies for support, she’s giving them all the cold shoulder.

Across town, Toya Bush-Harris and her hubby, Dr. Eugene, are out of debt finally and he’s no longer working a million hours a week to pay the bills. Since Eugene’s health scare in Barbados last season, Toya is encouraging him to live a healthy lifestyle. He’s loss 40 pounds and about to be skinny mini according to Toya. They attend a trampoline workout class together with a very overzealous instructor. Afterwards they sit down to catch up on the drama surrounding Quad. Toya tells Eugene that Quad has no time for her friends, since landing her new talk show job. 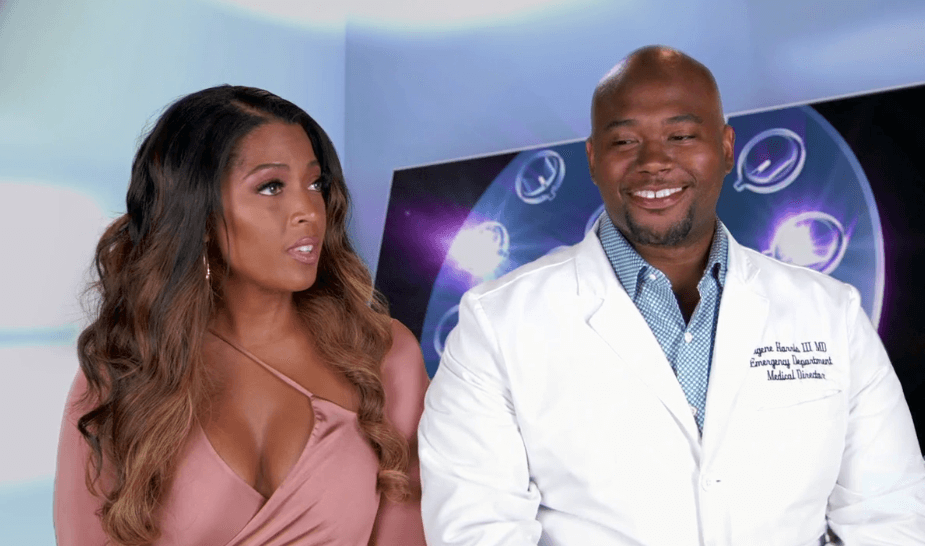 Over at Contessa Metcalfe’s house, she’s in full mommy mode, getting her kids ready for their day. Last season, she quit her medical practice to focus on her family. But she’s struggling with being a stay-at-home mom, and has put back on her white coat and returned to work in a part-time capacity. 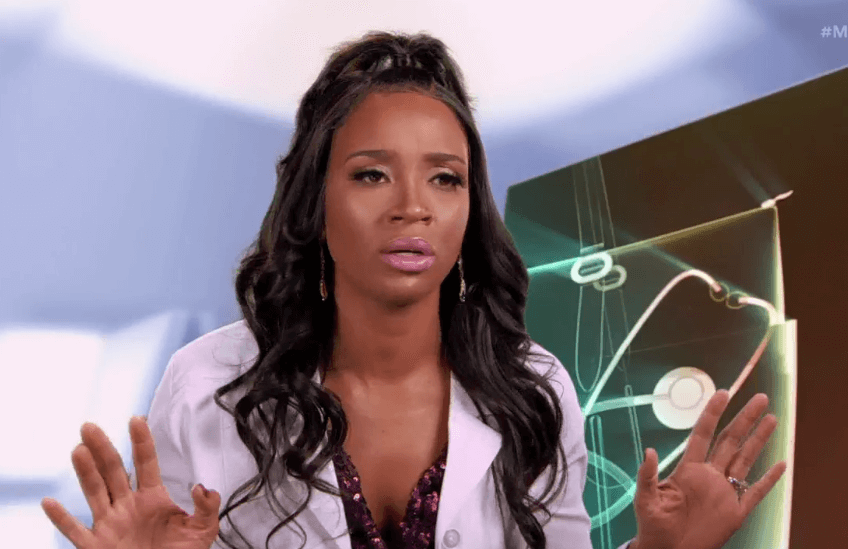 Praise the Lord for miracles! Simone and Cecil are moving in a positive direction to save their marriage. He pays his wife a visit at her medical office with a beautiful flower arrangement. They discuss their progress since calling off the divorce. They’re still living in separate houses and have not resumed having sex. Simone is apprehensive about jumping right back into the sack, while Cecil is sprung (literally) and ready to start mating rituals tonight. Simone needs to drop the drawers and stop playing with this man! 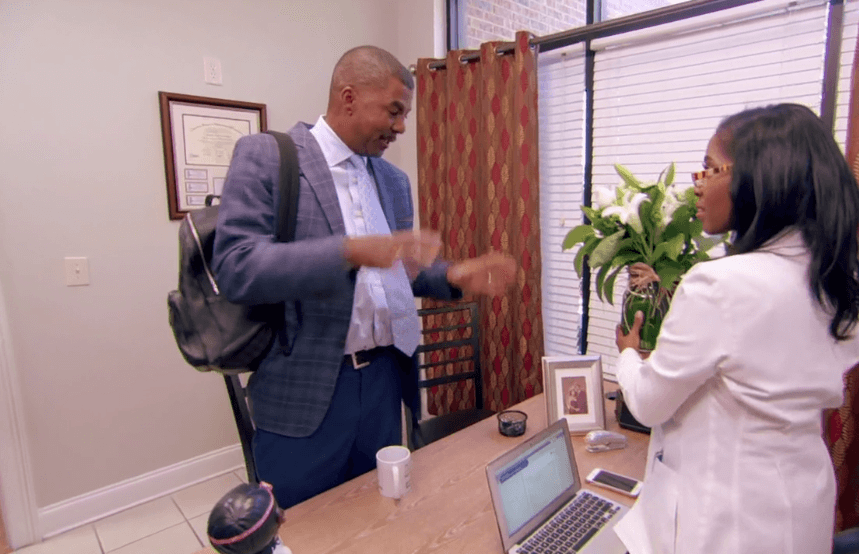 We visit Dr. Jackie Walters in the middle of a patient visit. Her patient, Dawn, is also a life coach. And after updating the patient on her medical status — the women discuss developments in Jackie and Curtis’ relationship since resetting their marriage, after his cheating scandal. Jackie admits that while their marriage is back on track in some aspects, she still has trust issues and is taking things one day at a time. Dawn reassures Jackie that it’s normal to have doubts throughout the healing process. 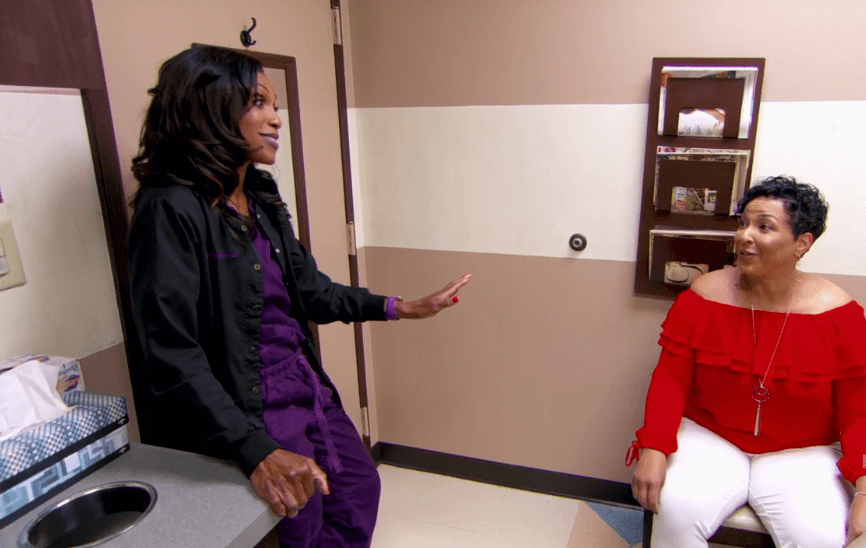 At Dr. Heavenly Kimes’ home, she and her husband Damon aka “Daddy” sit around the kitchen and reflect on the turmoil surrounding their friends marriages. Thank the heavens her minor daughter excuses herself because Heavenly has a habit of exposing that poor child to grown folks business and it’s not a good look. Heavenly then brings up the collapse of her “spiritual journey” — the one that she’s been on for many seasons. Some of the ladies think that she’s mean (rightfully so), which Damon confirms. He explains that her devil tongue is like ‘Bruce Lee,’ when she’s angry and spews hurtful things. Heavenly reluctantly acknowledges and agrees to address the issue with her spiritual adviser, Jewels Tankard, who really needs to consider another profession. 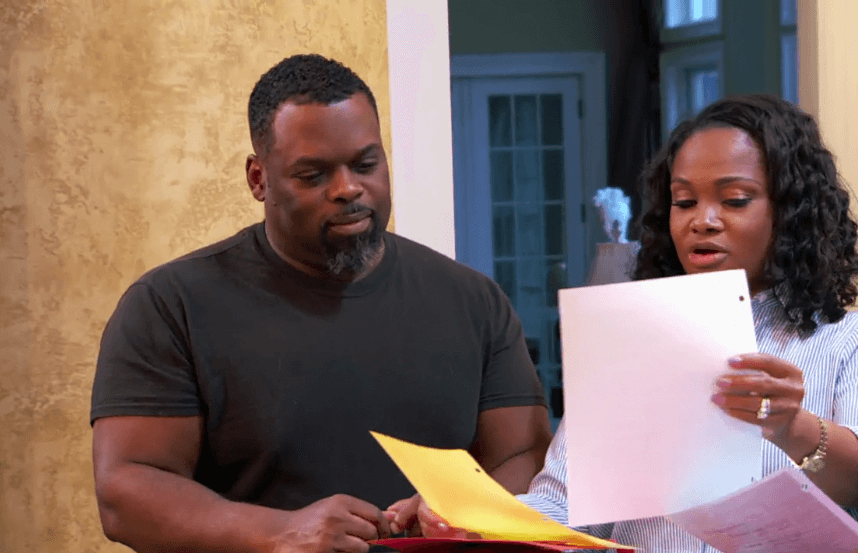 Mariah Huq is back full-time and all is right again in the Reality TV stratosphere. She and her husband, Aydin, playfully flirt as she prepares for Simone’s ‘Leather and Lace’ party. Mariah is wearing a skin tight cat tight that’s gripping every curve on her tiny frame. Her outfit comes with a whip, so she can whip these women into shape!

Jackie, Simone, Heavenly, Contessa and Mariah are all at the “Leather and Lace” party. Quad has been avoiding the group since All About the Tea’s article was published about Gregory’s mistress, and one of Toya’s sons had a medical emergency, so she’ll be late. The event starts off nicely as the women partake in sex talk, and try to convince Simone to give Cecil what he wants. Dr. Tiffanie offers Simone tips and supportive advice to get her sex life back on track.

Heavenly then decides to give Mariah a peace offering after she vandalized Mariah’s poster at the Season 5 reunion. Mariah’s ready to let the past go, until she opens the poster and sees it’s a photo of her 25 pounds heavier — obvious shade by Heavenly. And all hell breaks loose from there.

“Your apology ain’t sh*t to me! You know what you can do with you apology? You can kiss it!” Mariah says, slapping her ample behind for emphasis, and adding, “And anybody else that goes along with you on on your fake, phony a** spiritual journey can kiss it too!”

Heavenly plays stupid about choosing a shady photo of Mariah and tells her that her teeth are “beautiful,” to which Mariah replies, “Thank you! Why don’t fix yours and your husband’s?”

Mariah then delivers a TKO, after exchanging a few words, “I can tell you a lot of people that have slept with Damon!” she crows as she sashays out the door. “Do you want me to bring the receipts? Do I need to bring the receipts, baby girl? Because I got receipts!” Lawd hav’ mercy!

Mariah’s nuclear bomb knocks the wind out of Heavenly. Mariah steps outside then returns to the party once Toya arrives. The convo then switches to Quad’s marriage troubles and her avoiding the ladies. They’re all hurt by her actions and wished she’d “swallow her pride” and lean on them for support.

Next week on Married to Medicine — Heavenly channels her rage by seeking help from an anger management therapist.