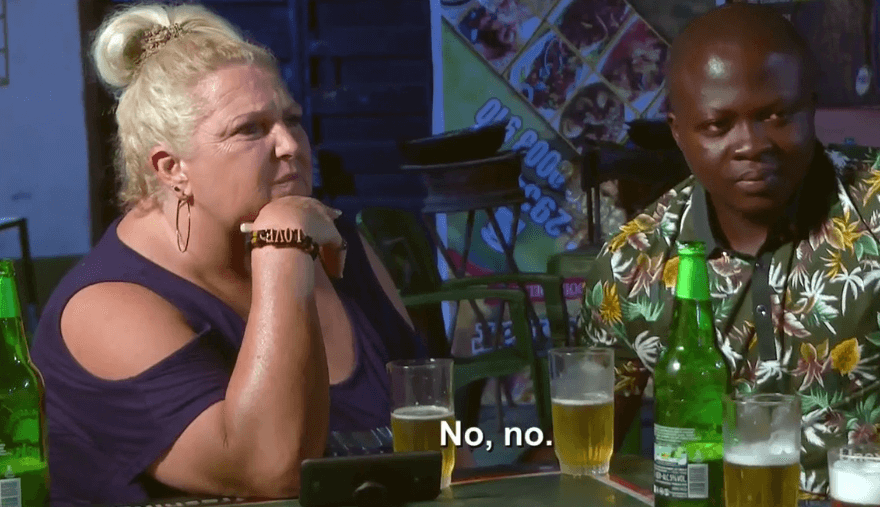 The journeys continued last night for six 90 Day Fiance: Before the 90 Days couples — check out the latest!

We join Rachel Bear and Jon Walters and Lucy in happy quasi family mode. Rachel is happy but a bit nervous, because she’s scheduled to meet Jon’s friends — hoping to learn more about his life. Jon’s mum is babysitting Lucy, so Rachel can score an earful about Jon’s dicey past. His pals are introduced, and reveal that Jon jumped the karaoke pond because he boinked every woman in the U.K. Daniel and Jack believe that Rachel is nice enough, but also note that their friend is a bit bonkers. Rachel reminds us all that Jon is a known brawler, which prevented his past travel to the U.S.. His friends link  his bed-hopping to his belligerence, but believe that a good woman can tame his hot temper. The couple  later takes a stroll along a river, where Rachel pushes for more info about his shady past. Jon admits that he’s been in 60 fights — 6-0 — perhaps explaining his perpetual blank gaze. He was arrested and convicted for five bell-ringers, including one which got him kicked out of college. Jon promises to be good and keep his fists to himself from now on.

A domestic squabble kicks off Paul Staehle and Karine Martins’ chapter. Karine is a sloppy maid and Paul is worried that she might not be able to handle a home and child. Karine has a hopping social media life to maintain, and believes that Paul is the real slob in the house. Paul is panicked that he might get stuck on diaper duty, so Karine calls him an idiot and assures him that she will clean a baby, even in a dirty house. Paul admits to being very “vocal” about his chore obsession, so Karine demands that he calm down before the wedding. A translator is called in to spare us all from the couple’s app counselor, during a meeting with Karine’s parents. Her mother wisely advises them to learn each other’s languages, to improve communication.

Karine shares her upset about Paul’s lack of trust and terrible app listening skills. Paul pleads his case on Karine’s loose internet habits, while Karine weeps in frustration. The duo later talks over Karine’s complaints, and Paul begs her to go through with the wedding. Karine feels pressured, but believes in Paul’s translated plea, so they kiss and decide that they’re still on. Karine and her mother go wedding dress shopping next, where her mom nudges her to rethink hitching her mop to a loser. The wedding has been rushed to beat Paul’s expiring visa, but Karine’s mom is worried and sad to lose her daughter.

Ricky and Melissa and Ximena

News Flash — Melissa is OUT and new Colombian taker, Ximena, is IN. Melissa abandoned Ricardo “Ricky” Reyes for an intense homework schedule, so he’s decided to move onto his next true love prospect. He wants to stay and see the sights, which evidently include any warm female willing to stroke an ego for a shot at life in America. He reaches out to Ximena, who jumps at her big chance. Ricky reminds us that he’s still upset about Melissa, but not THAT upset. He preps his love nest with cliche treats, but notes that he plans to be a gentleman to his next potential wife. Ximena actually shows up, and Ricky is thrilled that a warm body is actually in his presence. Ximena, 27, is cute, and believes that Ricky traveled to Colombia for HER — unaware that she really landed second to a junior spam-bot. Ximena is excited to have landed a live one, but Ricky begins to feel guilty that she doesn’t know that she’s really his second draft pick. Ximena is ready to put out, so Ricky shakes off his fake integrity until next week.

We catch up with Angela Deem and Michael Ilesanmi, who are sparring over Angela’s addiction to cigs and Michael’s blurt about her weight. The couple is planning a night out, so Angela asks about the local cleavage culture. Michael advises her to rein in the girls, but Angela is annoyed that the culture doesn’t embrace hoochie-chic. They agree that their age difference is rather cringeworthy, while Angela badgers and baits him, trying to pick a fight.

They head out to hang out with Michael’s friends, in the shadow of  Angela’s growing concern that her African prince might not be the one.   She’s ready to hammer his friends with questions, so when three innocent men show up, Angela immediately demands to know everything about Michael’s romantic game. Michael collects hotties on Facebook, but his friends vouch for their friend’s character. They remind her that African men are traditional bosses, but Angela disagrees, her brazen comeback raising nervous eyebrows all around. Angela goes on a bathroom run, and Michael’s friends encourage a swift escape. Michael spills that he’s looking for an American meal ticket, and adds that if Angela can provide such, he will hand over his pants.

The clock is ticking however, and Angela is worried that their issues might crash the romance. The pair later visits a nature preserve, where Angela lumbers over a nifty canopy walkway. The bridge holds, boosting Angela’s bruised ego. Michael begs her to shut her snappy mouth for the sake of love, but Angela blames him for triggering her with his ongoing doofus-ness. Michael knows that his future in America hinges on his next move, and vows to not mess it up.

Darcey Silva and Jesse Meester are basking in Connecticut misery when we join the couple, shortly after their latest fight. They’re hoping for a happier day, because they plan to share a tense family dinner later that evening. The vibe is like a slow horror movie, their experimental cohabitation proving to be a domestic torture chamber. They go on an excruciating shopping outing, and Jesse promises to can the negativity long enough to brag about his store bought carrot cake. They later pick up the girls, who are less than enthused about the dinner plan.

Darcey wants to see if Jesse really cares about the kids, but Jesse finds it difficult to connect with two teen girls. Aspen chats pleasantly with Jesse while the couple preps dinner, but he and Darcey soon begin exchanging jabs over the meal prep. Darcey notes that Jesse pushed her, raising yet another red flag. Jesse has a temper tantrum over mis-hacking a steak, and the girls witness the childish meltdown. The girls label Jesse a protein-sensitive drama queen, and he proves it when he continues to spin into a porch tizzy. The girls begin to wonder if they will ever get to eat, and Darcey is at her wit’s end.

Tarik Myers is still reeling from his trip to Hazel’s family’s church, but still wants to make the relationship work. Tarik’s bro, Dean, is busting onto the scene, bursting to ask all of the tough questions. Tarik warns Hazel that Dean can be protective/aggressive, and is already dreading the worst. Dean didn’t travel across the globe to play, so when the trio connects he lays it on the line.

He points out that their love affair was lightening fast, especially because Hazel is fresh off a previous romance. Dean inquires about her child, and shades her for not fighting for a life with her son. Tarik gets huffy, so Dean storms out and blasts the couple to TLC cameras. Hazel is shaken and angry, so she scampers away into the night.

Next week on 90 Day Fiance: Before the 90 Days — Ricardo “Ricky” Reyes boogies down and Jesse Meester makes a run for it.