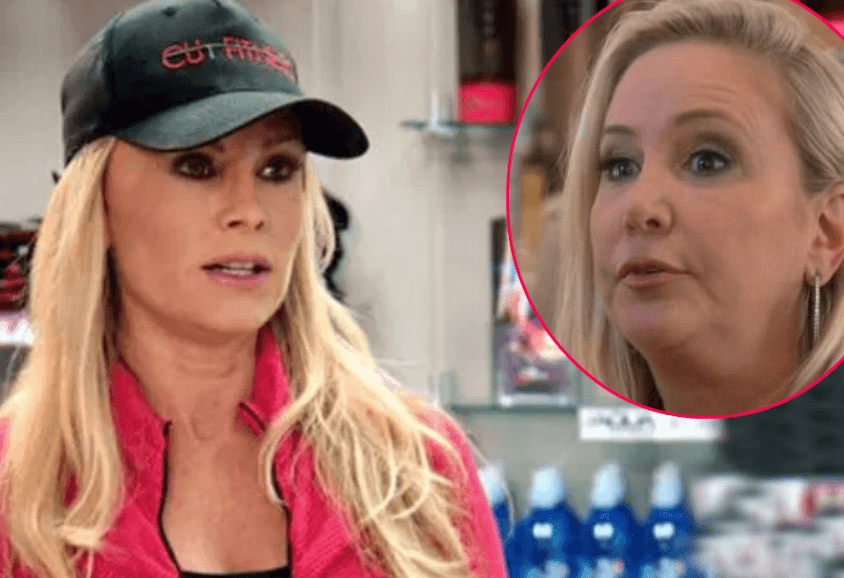 Tamra Judge is famous for kicking up Real Housewives of Orange County feuds — and this season, Shannon Beador has landed on her hit list. The gal pals weigh in on the latest drama in dueling Bravo blogs — pleading their cases before things really heat up.

Tamra shares her frustration over Shannon’s fitness direction — her bestie working it out far from Cut Fitness.

“I try my hardest to help Shannon with her weight loss and everything else in life. I’ve offered her nutrition advice, workouts at Cut Fitness, sending a trainer over to her house… She’s just not interested in letting me help her and always comes up with an excuse. Now hearing she hired a trainer makes me believe she doesn’t trust me. As one of her best friends, it’s very frustrating and a smack in my face to see her bring in another trainer after I’ve offered so many times. I am in the fitness industry, and she doesn’t want to use  my business. What am I supposed to think?”

Shannon explains her decision to carve out her own fitness path.

“It’s heartbreaking for me to hear that Tamra feels I don’t trust her when it comes to my weight and working out. I absolutely do respect and trust her and just wish that her gym was closer to my home.”

Tamra jumped from tagging Shannon with a trust issue straight to the bottom line — her own bank account.

“How would she feel if I ordered another frozen food company to be delivered to my house after she offered to send me her brand multiple times and then promote them? I don’t know how else to explain it.”

Tamra and Shannon clashed during a girls lunch, after rookie cast member, Emily Simpson, called out the ladies for gossiping about her marriage. Tamra admits that she was on edge, before the cast gathering.

“I was upset about something that had happened earlier with Shannon that day. I didn’t feel like my point was coming across at lunch. It might be the Champagne talking or misdirected anger.”

“Shannon had told me that Emily attacked her on the golf course and told her that she had to have “boundaries.”  I think “attacked” was a very strong word and Emily was not out of line.”

“The point I was trying to get across was that I was AGREEING with Emily that WE do need to set boundaries and none of us had the right to say anything about Shane at Tanners, including me. Not that SHANNON was attacking Emily‘s marriage or that she said Shane was abusive. Because that never happened!”

The conflict arose after Shannon noticed similar nuances between Emily’s relationship and the past dysfunction of her own failed marriage.

“…I was a little shocked when Emily told me I needed boundaries when it came to her marriage. I never said I was concerned for Emily. What kind of telephone game is being played? And now to incorporate the word “abuse”??? I apologized to Emily for something I never even said. I never talked about Emily’s husband.”

Tamra cuts to the chase, and explains what was behind her chilly attitude at the golf club lunch.

“Shannon then started pointing her finger at me, which pissed me off and led me to say, ‘Don’t blame me, Shannon Beador.’ Then Shannon got up and ran off and started yelling, “How can you do this to me right now? You know what I’m going through. In my mind, all I could think was ‘Shannon, we’re all going through our own sh — !’  I’m going through so much right now, but most people wouldn’t even know it because I’m not a complainer and I refuse to be a victim.”

Shannon writes that she found Tamra’s reaction confusing — clarifying her own side of the story.

“I’m not quite sure why Tamra is so angry. I didn’t make a comment about Emily’s husband or go after him, which is what was continually alleged. I said that something reminded me of my marriage. Tamra wouldn’t let it go, and I felt the need to walk away because it wasn’t stopping.”

Tamra admits that after watching the show back, her message was muddled — and that she blames her snippy reaction on stress.

“When Shannon called me hysterical about her water being turned off and not knowing you had to “pay for water,” I just couldn’t! I had just gotten the news that Eddie’s latest heart procedure didn’t work and Eddie decided to go off his medication without the doctor’s approval. I was extremely stressed.”

Shannon addresses Tamra’s claim that she had shown no concern over Eddie’s struggle.

“It’s more upsetting to hear that she feels I don’t ever ask about Eddie. This confuses me because I do. I wish she would have communicated her feelings to me, because that’s part of a healthy friendship. I can’t fix what I don’t know.”

Is Tamra Judge up to her same old game — or has Shannon Beador’s sob story crossed a cast boundary? Team Tamra or Team Shannon?

Watch the drama unfold on The Real Housewives of Orange County, Monday nights on Bravo.