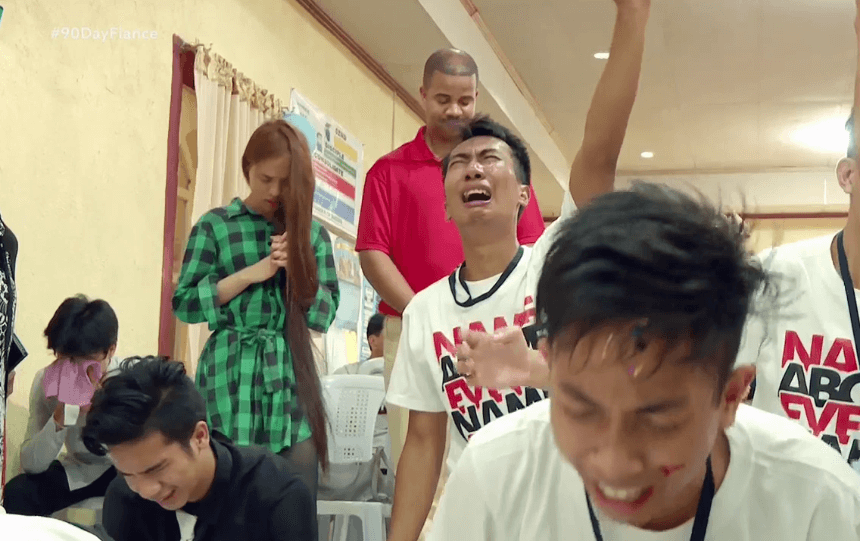 The stories of six 90 Day Fiance: Before the 90 Days couples continued to twist and turn Sunday night — so hold on tight!

The day dawns bright in Nigeria, and Angela Deem is ready to shake up Michael Ilesanmi’s neighborhood. The natives look understandably alarmed as the duo arrives — and Angela is nervous. Michael introduces his mother to his American gran-lover, and Aduke greets her peer with a warm embrace. Aduke is prepared to accept any woman who’s willing to stay subservient to her son.  Angela presents her with the carefully selected hillbilly bag, but her tacky gift fails to impress. The couple is welcomed into Aduke’s home, and the hostess kicks off the convo by asking how Angela feels about firearms. Angela laughs off the question, but assures her that her angel will be safe in her vise-like grip. Aduke dishes up a hearty plate of snails to celebrate, and Angela takes in a tiny bite, but in a reverse bloodsucking maneuver, quickly transfers the morsel into Michael’s mouth.

Aduke gives the strange romance two thumbs up anyway. Michael then introduces his honey to a couple of friends, and she grills them about the absence of her photo on Michael’s phone. They assure her that their buddy could be thrown in jail, if the cops catch a glimpse of such a cringeworthy, caucasian spectacle.

The couple later visits a local market, and Angela caves to a cig craving, much to Michael’s dismay. Michael wants a non-smoker who will dress African, but Angela is on edge, and doubts that anyone sells an XXL. Michael labels her a plus-sized problem to a pretty salesgirl, and Angela begins to boil. She pops him on the cheek, curses in frustration, and begins to worry that Michael is ashamed of her dress size.

We join the Bickersons in Times Square, where Darcey Silva is gushing over her budding faux family. The couple sits down to enjoy some pizza, and Darcey approaches the subject of social media, nudging Jesse Meester to allow her back on Facebook.

He is disgusted by the insane request, because Darcey still needs lots of “restructuring” before being set loose online. Darcey feels bullied, and they both crumble into repeat tantrums, wasting a perfectly good pizza. Darcey bawls and begs for Jesse’s love back at the hotel, much to his delight, exposing an even darker dimension of the toxic romance.

The couple later leaves NYC and heads to Darcey’s home in Connecticut. Jesse is looking forward to correcting American grocery shopping and all of Darcey’s hometown faults. Darcey keeps pushing an engagement narrative, but Jesse just wants to check out the sights. Jesse is stunned by the local beauty, but the joy doesn’t last long, and the couple is soon sniping at each other like bratty siblings. They check into an Airbnb, to avoid Darcey’s twin sister’s judgmental gaze, and Jesse is thrilled with his American pad. The couple is committed to presenting a united front when they connect with Darcey’s sis, Stacey, for the first time. The trio meets for dinner, and Jesse assures Stacey that he’ll hang in there, during her sister’s reconstructive phase. Darcey admits that they fight like dogs, and Jesse delivers, by pushing her buttons during the meal. Darcey labels their  dysfunction “deep passion,” but Stacey’s raised eyebrow isn’t buying it. A personal interview becomes a battleground, when Jesse won’t allow Darcey to passionately utter one single word

Ricardo “Ricky” Reyes is deeply in love — and denial — over his evening with Columbian spam-model, Melissa. He’s over the moon to be swilling real Colombian coffee, and can’t wait to see the country. Melissa isn’t so enamored, but Ricky is happily entrenched in his schoolgirl fantasy. His dream student has homework, and she even provides photo proof, to dodge another meeting.  He’s disappointed, so he consults with his cousin, who advises him to hit it quick, before Melissa’s lips get away. Ricky wonders if behaving like a gentleman was the right move — after inventing a scenario where he refused Melissa’s lusty advances. Melissa blows him off for the entire day, and Ricky finally admits that things on the romance horizon are looking bleak.

Paul Staehle and Karine Martins are headed to the altar, and begin their segment by filing the paperwork for a local wedding. They take a few minutes to discuss their future, via their app translator, and Karine shares her desire to start a family. They need a marriage fixer before they even say I do, and Karine thinks that a baby will trap Paul for good. Paul isn’t up for it, but he finally relents. Paul later drops the wedding bomb on his mom, via Skype, and she votes heck no. Paul suggests Karine’s procreation idea, and his mother is aghast over her angel boy’s reckless choices. Paul later admits that Karine is a bit of a child, especially when it comes to her sloppy housekeeping. Paul wonders how Karine will manage a baby, when she can’t get through an errand without rolling her eyes. Karine doesn’t appreciate being bossed around by a controlling clean freak.

RECAP: Angela’s Nigerian ‘Beast’ Rocks Her World On ’90 Day Fiance: Before the 90 Days’

Tarik Myers is feeling the heat, because he’s preparing to meet Hazel’s parents, after only scoring a measly lip-peck. Hazel leads Tarik to her family home, and Hazel’s worried, because Tarik might not live up to her family’s religious expectations. Her parents welcome him into their humble abode, and her mother offers a prayer of blessing. Tarik assures them that he wants to stay faithful to their daughter, and nervously agrees to visit their church. The Pentecostal church service lasts for six hours, and Tarik is shellshocked by the jarring experience.

Tarik informs Hazel’s parents that he’s not a Christian, but promises to respect their religion. Hazel’s parents aren’t thrilled, but promise to pray for his soul. Hazel is convinced that Tarik is the real deal, and gives his knee a complimentary squeeze to prove it. Tarik’s brother, Dean, is scheduled to arrive the next day — and things are about to get real.

Rachel Bear and Jon Walters begin their story by delivering a breaking news first romp update. They had a hot first night, but are now headed to Jon’s sister, Abby’s house. Abby is a famously blunt romance killer, a perfect TLC side player prospect. Rachel is nervous, and hopes that their true love will win her over.

Abby is a relationship skeptic, but welcomes her brother’s adopted family kindly. She notes that Jon is a past player, and is taken aback by the couple’s gushy chemistry report. Abby implies that her bro is a womanizing liar, but has to admit that the clueless honeymooners seem happy.

Rachel and Jon later share a messy parenting moment, and Jon expresses his nervousness about assuming a premature daddy role.

Next week, as 90 Day Fiance: Before the 90 Days rolls on, Darcey and Jesse’s relationship continues to crash, and Angela brazenly bares her cleavage.