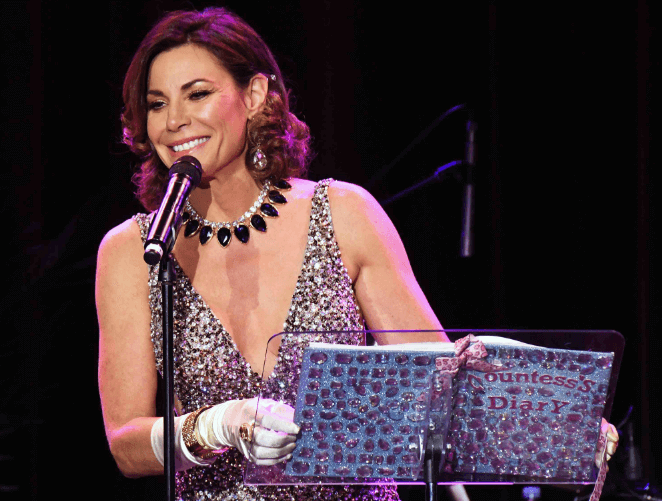 Some #bts clips from last night! Again thank you guys for coming to @borgataac I hope you guys enjoyed my show and won a lot of money !#countessandfriends @mrsjillzarin ❤️? wearing @jovanifashions makeup/ hair @marygordonbeauty

The 53 year-old put on a dramatic performance that included throwing shade at her Real Housewives of New York City co-stars, Dorinda Medley and Ramona Singer.

After poking fun at herself for returning to rehab in six months, “I actually loved rehab, I loved it so much I went back again. You get to take care of yourself for weeks at a time,” she then took aim at Dorinda.

“It is a Jovani and he actually loves me! To hell with Dorinda. She’s probably in the back cutting up my dresses.” Luann said triggered by chants of “Jovani” from the audience.

During the RHONY Season 10 finale, Dorinda melted down after Luann did not shower her with overwhelming gratitude — for Jovani dress designs “worth thousands of dollars” — secured by Dorinda for Luann’s cabaret perfomance.

Then Luann dissed Ramona during a Q&A with the crowd — when asked which of her costars she would:

I have arrived , am arriving and will arrive again! Thank you Borgata! #countessandfriends #casinoandcountess

But Luann praised co-star Bethenny Frankel for handling the explosive RHONY Reunion that aired on August 22, while she was in rehab.

“Well, I couldn’t be there, sorry, I was in rehab. I watched five minutes of it and it was so dark I had to turn it off,” she answered a fan’s question. “Bethenny did a great job, she had her hands full and Carole [Radziwill]’s gone now.”

When asked about Carole Radziwill leaving the Bravo reality series — Luann commented that Carole’s departure is tied to her feud with the Skinnygirl mogul.

“I think it’s sad and I think it’s Carole knowing that Bethenny is now throwing shade for her and it’s sad.”

In a farewell statement, Carole stated that she was leaving the Housewives after Season 10, to return to her original passions.

“After six seasons on Bravo’s RHONY, I have decided to return to what I do best — journalism and producing,” she told People. “My original curiosity about reality television has waned over the years and I am focusing on TV and writing projects that better suit my more steady temperament.” She also joked that she is “thrilled to leave frenemies behind.”

The once solid friendship fell apart in season ten, and as the collapse currently plays out for the Bravo audience, Carole shared personal insight, via her Bravo blog. “In real life, you may never discover that a friend is being nice to your face only to make rude and hurtful comments behind your back. But lucky (or unlucky) for me, I get to hear it all — Bethenny’s drumbeat of insults, her spate of digs, and her self-serving narrative.”

Share your thoughts on Luann de Lesseps shading her Real Housewives of New York City costars, in the comments below!