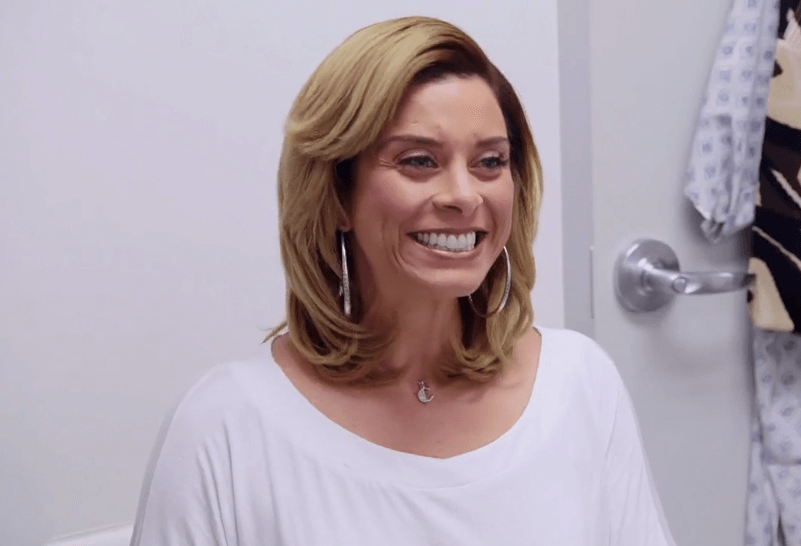 We return to The Real Housewives of Potomac just as Robyn and Gizelle are storming the castle of Karen’s charity event. Gizelle walks past Sherman’s ex-wife, Kyndall, though she sees her, on her way to confront Karen. But Karen ain’t playing that game and calls her old friend, Security! Gizelle and Robyn are quickly booted out of the building. Charrisse and Ashley follow them to get the scoop on what didn’t go down. Gizelle explains they are sick of Karen’s lies.

Ashley and Charrisse are told the doors will be closing, so right before they go inside, Charrisse apologizes to Robyn for not attending her event and an argument ensues. If they can’t fight with Karen, Gizelle and Robyn will fight with Charrisse. Meanwhile, Charrisse’s hot date is just hanging in the background, looking like he’s about to split. Charrisse’s senses it and goes back in with him. Ashley soon follows.

Back inside, Carson Kressley is killing it with jokes and Karen gives a touching speech. When Karen sits back down, she asks Kyndall if Gizelle saw her. Yes, she did. And shady Michael declares he won’t be writing a blooming check to the I “con” in the room.

Next, we join the happy couple as they work on their wedding guest list. Chris asks Candiace if she’s contacted her father because they need him to kick in more Benjamins. The breakdown is: mom-$100K, Dad-$20K, Chris & Candiace-$20K, but more money is needed to give Candiace the obnoxious wedding of her dreams. She calls Daddy and squeaks, Hiiii! I need more money because 400 people are invited. Daddy’s little girl gets told no. Chris suggests they save money by Candiace wearing only one dress. That won’t be happening. Two dresses are a most. And trees are a must. And 400 people, who are mostly acquaintances, are a must.

Onto Gizelle and her unenthusiastic intern named Gabby. She tells Gizelle she takes notes on her phone because people never leave their phone behind, said two out of five people. EveryHue will have a booth front and center at the upcoming Congressional Black Caucus and it’s got to be fabulous. It takes a few tries but Gizelle finally gets Gabby to get excited about it.

Ashley is sipping tea and calls her uncle looking for no-nonsense advice. Ashley tells him that Michael doesn’t want to have kids because he thinks she’ll be like her mother. Ashley’s uncle says exactly what I said last week – Michael is full of shit. Her dear uncle takes it a step further and tells Ashley that Michael only wants a trophy wife and doesn’t want kids. Ashley says he knew from the beginning she wanted a little Joey.

It’s Pilates time with Ashley and Gizelle…again. Gizelle would prefer to do nothing. Across town, Karen is working out with the young’uns, Monique and Candiace. Robyn joins Gizelle and Ashley. After the workouts, we go back and forth with different tales of Karen’s charity event. In her talking head, Karen is asked by producers how much money her charity donated to the Alzheimer’s Foundation. Karen cackles and refuses to answer. Gizelle says she knew Kyndall was going to be there and doesn’t care one bit that this woman who has been divorced from Sheldon for six years was there as Karen’s guest. Me thinks she does. Robyn gets a call from Charrisse asking to go to dinner so she can eat crow.

Later that week, Candiace joins Ashley at Oz for some kanga and some rue. Candiace tells Ashley she is drowning in a sea of wedding details and nobody will throw her a lifejacket. Ashley explains people will only remember if they had fun, how much they drink, and her dress. Candiace confesses that Chris is sick and tired of hearing about the wedding. Ashley offers no advice, but changes the subject to her problems. She shares that Michael doesn’t want to have a kid with her because of her mom. Candiace suggests that maybe Michael doesn’t want kids at all and he’s making up reasons to get out of it. Ouch. Ashley is like, Girl, that’s too much honesty. But she admits her uncle thinks the same thing.

Next we join Robyn and Charrisse over food and cocktails as they try to get their friendship back on track. They discuss Charrisse ditching Robyn’s event for Monique’s. Charrisse claims she didn’t know it was Robyn’s actual event, which no one believes because Gizelle told her so. But for some reason Robyn accepts this excuse and tells Charrisse it was her quick dismissal that pissed her off. Charrisse says she’s rethinking her friendship with Monique because of her thirsty friend-poaching ways. Especially when it comes to Kyndall. Charrisse finds that very shady.

We join Gizelle for the CBC to network and sell her stuff. She has a great spot, y’all. Right up front, you can’t miss her, even if you tried. Robyn, Charrisse and Ashley all stop by to say hello. Monique and Karen are going to the CBC together, and in the car ride over, Monique tells Karen that Charrisse is not returning her calls. When Karen and Monique walk inside, they purposely avoid Gizelle’s booth. Update: According to Monique, they were not invited to Gizelle’s booth.

What @GizelleBryant is failing to mention is she invited everyone to her booth except @KARENHUGER and I. Which was fine! So why would we walk up on her booth?! #rhop

Robyn spots Karen and Monique as they’re about to sneak out, so she and the other ladies stop them. Karen and Monique lie, or rather, tell a falsehood, and say they had no idea that Gizelle was right there in front. Monique and Karen walk out because they’re tired of the drama. Robyn then starts screaming “LIARS,” at the women in a classless display (of women empowerment?). Who behaves this way at the prestigious Black Caucus Convention?

Back at the booth, Candiace arrives to say hello and says she noticed Karen and Monique storming off. Gizelle asks Charrisse if she’s starting to see the light about Monique. Charrisse says she will have a conversation with Monique in her own time. Gizelle then kicks the ladies out of her booth because she needs to connect with real customers.

Over at Candiace’s house, the tears are falling and the wedding ring is off. Chris asks if she wants to talk, but Candiace says, What else is there to talk about? Apparently the CBC after party was quite the shin-dig. The happy couple got into a tiff because Chris called Candiace a spoiled, diva, princess all because she wanted him to hold her crap. During their fight, Candiace texted Chris a real gem. She told Chris he’s a “coward and a shit-clone of your deadbeat father and you can f*ck-off and get the f*ck out of my life.” Wow, Miss United States. Do you kiss your mother’s ass with that mouth? But then Candiace apologizes, the two kiss and make up, and the wedding is back on…for now.

Tune in next time to see Charrisse and Monique have their moment.