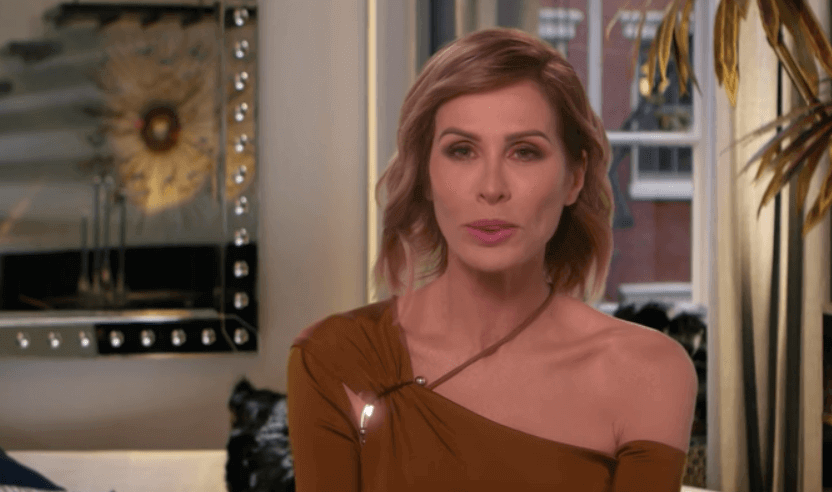 The close friendship between Real Housewives of New York stars, Carole Radziwill and Bethenny Frankel is officially over, and Carole continues to share personal insight, via her Bravo blog.

Carole begins this week’s blog by pointing out the contrast to the Bethenny she once knew, to the woman she considers an enemy today.

“I miss the old Bethenny– the one who didn’t take herself too seriously. She was always a master at self-promotion and quick to insult. But that Bethenny was also quick to see when she was wrong, or had overreacted and quick to say sorry. Sure from time to time, she makes fun of herself, but now it’s just so she can mock us too, or for more camera time. [eyeroll emoji]”

“The Widow’s Guide to Sex and Dating,” author calls out her former friend’s grandiose sense of self-importance.

“We are all puzzled as to why Bethenny takes such glee in being a bitch. She says with pride, “I put the B in Berkshires” and then smiles as she tells Sonja, “I’m four for four!” Yay!!”

“Even when she is doing something great – like raising money for charities – she can’t help but be mean. It’s as if doing a good deed gives her permission to behave badly. She screamed at Sonja when she learned Sonja only donated $150 to her cause; called Luann a loser for volunteering for the American Red Cross; called Adam an operator. She told so many people that I didn’t support her that it nearly got in the newspaper. (I donated $5,000. I asked friends for use of their private planes.) When I ran the marathon she sent me a balloon, a hat, and a bitchy text.”

“Yet still she is a friend (or I thought she was) and it’s hard to hear her be so demeaning when I’ve always had her back – even at times when I thought she’d overreacted.”

Carole points out Bethenny’s jabs behind her back.

“Nevertheless, she has made snide comments from the moment we started filming this way back in October. On last week’s episode she says we have nothing in common because I am husbandless (she is too), childless (she has one more child than I do) and jobless (we have the same job).”

“And now this week she age shames me (she’s not much younger either) Like I said in an earlier blog post — it’s 2018, it’s important for women to stand up and be heard. I should have done it when she insulted me but I didn’t hear it above the din of evening screaming. Lol.”

“So I’ll just say this. I buried my husband at 34 and ran a marathon at 54. I am not defined by age, I defy it on all counts. I’m proud of my age and for what I have been able to accomplish in my life. My hope is that all women are proud of their accomplishments, small or big. I know it can be difficult as ageism and sexism swirls around us in nearly every aspect of life – including, apparently, in friendships. But there is no difference in 45 or 54 or 34 if you are living an authentic life with healthy amount of nostalgia about your past and curiosity about what the future may bring. Life is long, play it that way.”

The 54-year-old points out that Bethenny is not supportive of the women on the cast and uses the show to solely promote her Skinnygirl brand.

“Bethenny is nine for nine. Nine episodes, nine insults. Let’s try to put all that toothpaste back in the tube. I’d like to. Ramona may not always be right but she was dead right in this episode. Does Bethenny seem like a woman who is supportive and uplifting to other women? She’s on this show to build her brand at everyone else’s expense. She put the “B” in brand too.”

Carole adds that Bethenny bulldozes every conversation with the use of intimidation and lies.

“She is incapable of having a conversation where she isn’t in control of the entire narrative – her’s and everyone else’s – regardless of the truth. She lies about us over and over and over until even we sometimes believe it! Wait, was I traveling all summer with Tinsley? In the show I actually look like I am entertaining that as something other than more of Bethenny’s propaganda. Wait a minute, I spent more time with Bethenny last summer than I spent with Tinsley.  Wait, I was in LA most of the summer helping my friend whose husband had died. Wait, Tinsley was traveling all summer with her boyfriend. That all happened right?  Yes, those are the facts of last summer. And I have the receipts to prove it. Thanks to my Twitter fans for that new phrase! Bethenny should give a master class in gaslighting.”

Carole drones on about her riff with Bethenny, dissecting and offering a rebuttal for every dig Bethenny leveled against her in the episode.

And didn’t I warn you in episode one that she was all about my clothes this season? Lol. She literally can not stop talking about them. It continues until the last frame of the last episode too. Wait for it.

This episode she makes a dig about my mystery dinner dress saying I was playing myself,  “a know-it-all politician with a dead husband. “Wow. Just wow, from someone I thought was my dear friend.

Are her outfits so great? Contrary to this, I’m so busy being busy narrative, she clearly has a lot of time on her hands if she’s able to get Snowmies sweatshirts, Santa pajamas, Elf pajamas and a diamond piece for on top of her head. (I did think that piece looked amazing!)

And my vanity (a.k.a. new haircut) is so upsetting to Bethenny that she nearly starts to cry? Really? She paints me as some superficial girl whose only care in the world are her outfits, her hair, and her selfie filters – while she is so busy being deep and running an empire. If I’m vain then Bethenny is vainglorious.

I will say the only thing more absurd then arguing with a girlfriend over hair care, is arguing it in period costume. I felt bad for the both of us. J

— It is absurd to say I am interested in hair when she is always wearing clip in hair weaves.

— It is absurd to say I care about my clothes when she is literally obsessed with mine, with hers, and also has a stylist on her payroll.

— It is absurd to say I act like a seven year old when she is shoving herself into elf pajamas and rolling around on the floor naked to get attention. That is literally what 4-year olds do.

— And ladies and gentleman, you all know what I’m going to say next, it is absurd to say I’m interested in selfies when literally every waking moment of her life is plastered all over social media.

And that’s all great – you do you, boo – but the hypocrisy is mind-bending.

Lastly, Carole is alive and doing well and enjoying her best life. I’m not sad, lonely, or in pain over a break-up. That misogynistic narrative is so 2004. Women have come a long way, baby. Bethenny’s faux concern over my well-being is comical.

The Real Housewives of New York, Wednesday nights on Bravo.