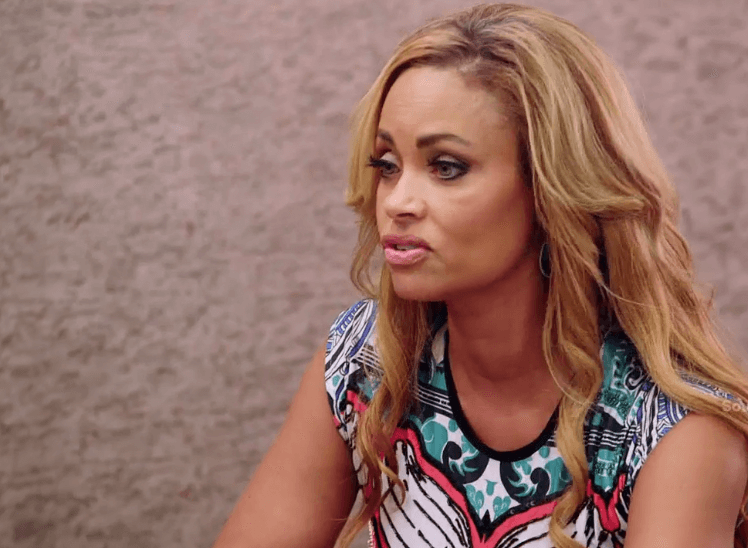 Things are happening on The Real Housewives of Potomac. Gizelle’s book is being ghost-written, Candiace’s wedding is being planned by her mother, and Monique and Robyn have upcoming dueling events. Won’t that be fun!

We join Ashley doing her yoga. She claims things are better with Michael except for one issue – the prenup. So here’s the breakdown: Ashley signed a three-year prenup when they got married. The couple separated at 2.5 years, but lo-and-behold, Ashley rediscovered her love and returned to the marriage. Ashley says she’s willing to extend the prenup as a gesture that she ain’t no gold digger.

Next we join Gizelle who is getting her blood and collagen mixed for a facial. Eww. Robyn stops by the doctor’s office to talk about Gizelle’s upcoming birthday. Will Sherman show up like he did last year? Nope. Seems Sherman doesn’t like the drama spotlight that comes with dating Gizelle a Real Housewife. Robyn is excited that everything for her day of empowerment is coming together. She put the entire event together herself and plans to share her financial woes with others in the hopes that no other woman has to go broke again.

Next, Monique and her mom Jenny are shopping for gowns for a black-tie gala. Wowza. Jenny looks more like Monique’s sister. Gizelle needs to find out what Jenny’s doing and do that. Just saying, mixing blood on your face is cray-cray. Another friend, Gigi, stops by to try on gowns and it’s a party. Break out the champagne, because you know Monique will have some.

The charity Monique is supporting is the Human Growth Foundation. They help kids with growth hormone deficiencies. Monique will be presenting an award to someone who did something. There’s a conflict, however. Both Monique’s event and Robyn’s event are on the same night. Ruh-roh! And get this, Robyn didn’t invite Monique and Monique didn’t invite Robyn. Won’t it be fun to see which event the other ladies pick? Lines will be drawn.

Over at Candiace’s townhouse, she is busy having a discussion with her mother. Candiace brings her mom snacks on a tray with a glass of wine to ask if she can run the new hair store in Maryland. Candiace thinks her mom doesn’t give her enough credit for the business she started with her mom’s money. Candiace’s mom is a therapist so negotiations are like psychological landmines. More wine will be needed.

Ashley has stopped by Michael’s office to sign the prenup papers. Deep down she wants Michael to say she doesn’t need to sign it, but that ain’t gonna happen. He gets Ashley a pen and the paperwork while on his hover board, and I must confess, part of me wanted him to fall. Ashley shouldn’t sign these without consulting a lawyer. And when she asks a question about the documents, Michael shuts it down. He refuses to discuss the terms of the prenup with the cameras in the room. Dude, eat an awesome blossom and chill out. Ashley signs the paper without any more interruptions.

Birthday party time! Gizelle and Robyn toast themselves, the green-eyed monsters bandits, before the others arrive at the pool party. Ashley, Karen, Monique and Charrisse arrive. Candiace wasn’t invited because Gizelle doesn’t like her.

Where is Candiace? She’s hanging with fiancé Chris. She tells him she’s received the quote from the wedding planner for food and beverage and it’s over $18K. Candiace asks why such a high price? Is Jesus Christ serving it? Baby girl, if your budget is $100K, you can afford $18K for food and beverages. It costs a lot of money to turn water into wine. Chris doesn’t say much because he ain’t paying wants Candiace to sample the new cocktail he made in her honor. He says it’s dark, bitter and sweet. Is that even a compliment? Candiace likes it, but is still sad because she’s got pool party FOMO.

Back at the party, Gizelle calls out Charrisse for choosing Monique’s event over Robyn’s. Charrisse says that she was asked months ago to attend Monique’s event and calls Gizelle messy for bringing it up. Miss Ashley Busybody brings up Sherman. Where is Sherman? Why isn’t Sherman there? Girl, sit down. Everyone knows Sherman is M.I.A.

A few days later, Robyn and Candiace meet up for oatmeal. Although she wasn’t invited to Monique’s event, Candiace is going to Robyn’s event. Karen arrives late and blames her assistant Siri for saying yes to both events. Siri is so fired. Karen explains that Siri said yes to Monique’s event first so she can’t attend Robyn’s event. Robyn tries to explain the difference between events, but Karen just shrugs her shoulders and says there’s nothing Siri can do. Robyn gets up and leaves because she’s had it with Karen and her fair-weathered friendship.

Across town, Chris and Monique and Ashley and Michael go bowling. Things are better after signing the prenup and Ashley is now sexting pictures to Michael again. Oh joy. After Michael finally discovers a sport he’s good at, they talk about having babies. Michael says he’s getting closer to wanting another kiddiwink and this makes Ashley happy. Who needs a prenup when you have an heir!

The men-folk leave so Monique and Ashley can talk about the dueling events. Ashley explains she’s going to Robyn’s event because she actually put her event together. Monique is surprised because she felt Ashley owed her this on account of her ruining their friendship, but hey, it’s cool. They talk about Sherman and, girl, I don’t know why Monique didn’t spill this tea sooner. She knows his ex-wife. Apparently, Shermie got arrested a few years ago for having sex in his car in the park with a woman who wasn’t his wife. Oopsie. I hate it when that happens.

We are now with Robyn and Juan at their place as they prepare chili for Gizelle and Sherman. According to Robyn, Juan is a changed man after meeting with the medium. Maybe that’s what Sherman needs. Back in the day, Juan and Sherman knew each other, but Gizelle arrives alone, and Juan is totally bummed because he could be watching football. Word on the street is Sherman and Gizelle are over.

Gizelle says Sherman told her he needed “another perspective to see whether or not” he should be in this relationship. Is that right? From whom, pray tell, does he need this other “perspective” from? The woman from the park? Juan recommends that Gizelle be more patient and not to let pride get in the way – and he should know.  Gizelle says she wants to get what she gives – which is attitude and a constant need for attention and gifts? Sherman is out.

Tune in next week for a tale of two events, plus we meet Sherman’s ex-wife!