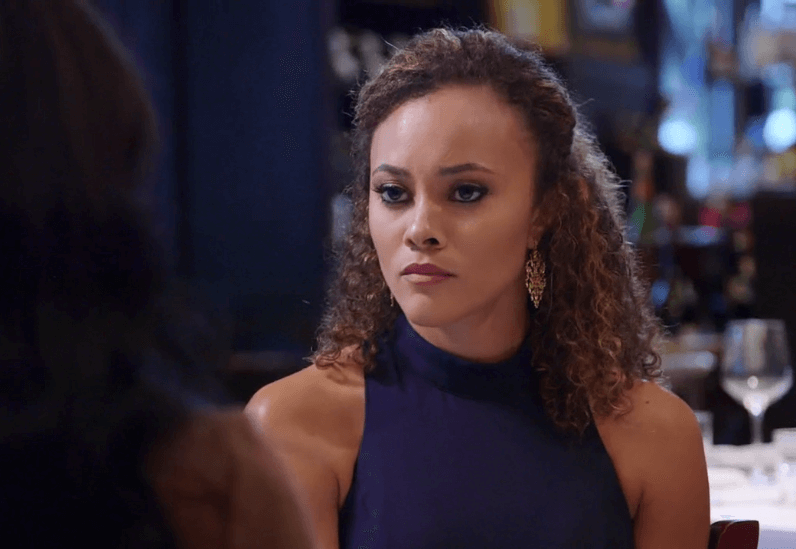 Happy Memorial Day! Welcome back to The Real Housewives of Potomac. We pick up right where we left off, mid street-fight with the ladies. Monique is no longer threatening a beat-down for Robyn because Karen has successfully extracted the umbrella from here hands. Monique is now busy telling everyone she has more to lose than the rest of them on account of she’s rich and they ain’t. Charrisse has Monique’s back and tells the ladies it was wrong to make an accusation about drunk driving. Robyn is not feeling this, and not because it’s tacky to fight in public, she doesn’t like that Charrisse is there for Monique. Monique cries into Charrisse’s arms, saying she regrets letting her guard down with these women.

Next we check in with Candiace who is feeding the fish with her future husband Chris so they can get away from her overbearing mother. They discuss Chris’ many kids. He has two little kids, plus a 15 year-old boy he hasn’t seen in almost 10 year with a different baby-mama. Candiace hasn’t told her mom about him yet. Both Chris and Candiace come from broken homes and she is trying her best not to repeat the cycle, but she’s got an uphill battle.

Over at Robyn’s house, Juan has come home with vegan food on account of he watched a documentary about vegans so now they are vegans. They discuss their son’s birthday party and who to invite. Turns out, Juan’s daddy ain’t his real dad. He learned about his real father after his mother and father passed away. Robyn has contacted a psychic because it’s required by the Real Housewives franchise they want to find some closure. Robyn also wants to know about the dude who stole their money because she’s tired of other women (Monique) throwing money in her face.

Monique and her baby girl drive way across town to Karen’s house to apologize for getting all ghetto the other night. Karen feels a kindred spirit with Monique from the haters of the group called Gizelle and Robyn a.k.a. Jack and Whack (?). In the meantime, Monique is busy organizing supplies for a couple of U-Haul’s going to Houston for hurricane relief. She tells Karen she would like to extend the invitation to include the ladies, but she’s unsure if they can behave. Karen says she will.

Candiace is having lunch with her mom at Chris’ restaurant because she loves his BBQ. Through tears, Candiace drops the news about Chris’ 15 year-old son, but now he’s 14. Mom is actually very supportive once she hears the other baby-mama won’t let Chris see his child. She recommends that Candiace not sweep things under the rug. Chris stops by the table and learns the baby is out of the bag. He too tears up as he explains the hurt over not being able to see his child. I’m sure there’s more to this story, but Mom tells Chris to give it time, and by the way, does he have any more secrets?

We catch up with Gizelle who is getting her hair did. She confides in her hair dresser she is stressed out. Her ghost writer is busy with the book, her mom is dealing with Hurricane Harvey and thinking about moving to Potomac, and she doesn’t know where things stand with Sherman. Gizelle compares herself to super woman, and is about to be overcome with tears, but walks off camera because the ice-queen doesn’t want to be seen this way. As her hairdresser washes out the highlights and gives her a pep talk, Gizelle again struggles not to release the tears. Let it flow, girl.

It’s a rainy day, but people have shown up to lend a hand and donate goods for Hurricane Harvey. Gizelle drops off a couple cases of water and is out of there. The only no-show is Robyn who is busy planning a “She Is Empowered” event to lift other women up. Hey Robyn, charity begins at home. Back at the hurricane relief drop-off site, the two U-Haul trucks are filled to the roof. Great job!

Up next, Ashley and Monique are meeting for lunch to try and clear the air. For the record, Monique is drinking hot-tea, y’all. She has learned her lesson not to drink with Ashley. After ordering, Monique gets right to her hurt feelings and Ashley apologizes for ruining her reputation by announcing she was drunk. Ashley says her intention wasn’t malicious, but time will tell if Monique really believes that.

Over at the slightly larger townhouse, the “medium” Justin with white hair has arrived. Robyn and Juan are nervous. Justin informs them a lady is there named Nita. Juan’s mouth drops open in disbelief. It’s his mother, Juanita. Nita is embarrassed about the way she died. Justin points to the fold in his arm and indicates a struggle with drugs. We learn Juan’s mom died from AIDS. Also in the room with Nita is Juan’s father figure whose name begins with a P. Juan and Robyn are floored because his name was Phil. Justin tells Juan that Phil is not his biological father and that Phil always suspected he wasn’t.

Next, Justin informs Robyn that while he’s been sitting there doing his medium thing, he keeps seeing a vision of someone jumping off a bridge. Robyn and Juan are floored yet again. They ask Justin why. Justin explains this person with an E name didn’t know how to ask for help. We learn that the guy who spent their money, Earl, is the guy who jumped off the bridge. Here’s the thing, Earl is content in the netherworld and isn’t ready to apologize for his misdeeds. Robyn and Juan are pissed that Earl still won’t apologize for stealing their money. Look at the bright side, they now have the closure they wanted. Back to mom, Nita, she is thrilled that Juan’s real father has come forward, but if she were still alive, she wouldn’t have mentioned him. After hearing that Nita is happy they are back together, Robyn says a weight has been lifted.

Scenes of the rest of the season are shown at the end of the episode and let’s just say things get even more messy, leaving the impression that everyone one of the ladies’ romantic relationships are on the verge of disaster.