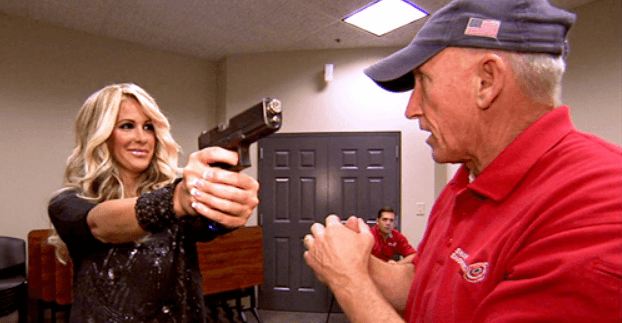 Kim Zolciak-Biermann has landed herself in the middle of controversy yet again!

The Real housewives of Atlanta star flaunted her husband’s Kroy Biermann’s gun collection on Snapchat, prior to an outing to the shooting range.

“This is about a quarter of Kroy’s guns,” she told fans before focusing on a pink-handled handgun, saying, “That’s my baby.”

Kim continued, “We’re going to the gun range with Brielle so she can keep practicing shooting and what-not.”

The mom of six and Kroy are parents of KJ, 6, Kash, 5, and 4-year-old twins Kaia and Kane. Biermann adopted her daughters Brielle, 20, and Ariana, 16, from a previous relationship. Guns are dangerous, especially around kids. Many times, guns are fired by accident — hopefully, the couple’s kids know what to do if they find one of their guns.

The 39-year-old recently came under fire on social media when she and her husband gifted their eldest daughter with a customized Glock 43, complete with a rose gold slide, for her 21st birthday.

What are your thoughts about Kim and Kroy’s gun collection? Sound off in the comments!