Well, it’s time for our yearly Married to Medicine getaway. This time, the devilish Dr. Heavenly Kimes is taking over as hostess, as she’s the self-proclaimed relationship expert. But since she’s been shooting “yo mama” jokes at Mariah Huq all season, Heavenly isn’t sure if she should invite her nemesis on the trip. After consulting with her spiritual advisor, Heavenly decides to do the right thing and extend an invite to Mariah and her husband, Aydin.

Before leaving for Barbados, Dr. Jackie Walters and her cheating man, Curtis, have a marriage counseling sesh, via Facetime with Dr. Ken. Jackie describes Curtis’s affair as an “inappropriate relationship”. She wants to build back trust, but needs details. Curtis admits he was feeling neglected and lonely. Jackie takes ownership of putting distance between them, but says blame for the affair lies totally with Curtis and his wayward penis. 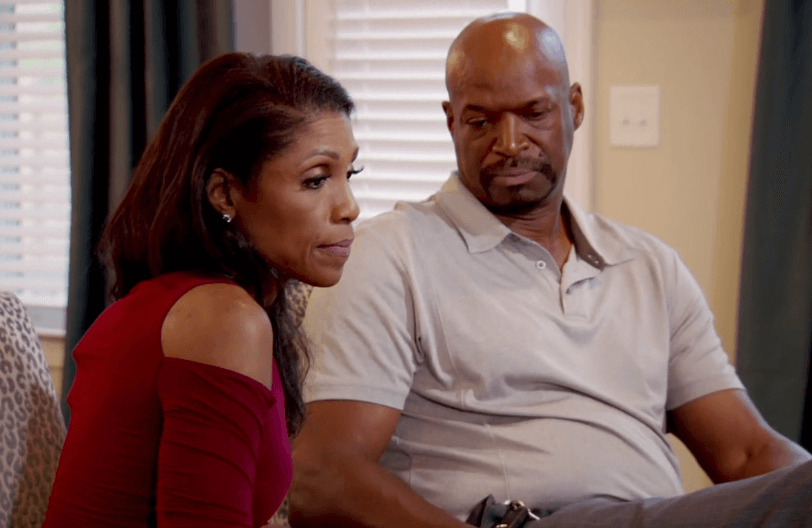 The couples all meet at the airport, and while Jackie is fine flying solo, Curtis shows up unexpectedly. Dr. Simone Whitmore has invited him along for the ride. Because that’s what best friends do: sideline you with your cheating husband. Surprise!

Once at the hotel, everyone has a plate of nibbles and a drink. Outside, Toya Bush-Harris and Mariah discuss Curtis’s reentrance into the group. Mariah admits marriage is hard, but hey, it’s a lifelong sentence. Toya isn’t buying it. After all, if Mariah stepped out on Aydin, would he stay in the marriage? Um…well, Aydin explains, cheating isn’t the same for men as it is for women. With men, they can play tag and bag all day, and never allow their emotions to enter the picture. Women get emotionally entangled in their side piece. See the difference?

Inside, Simone hints that Curtis owes Jackie a new wedding ring. Quad Webb-Lunceford says bling don’t mean a thing when you’re not feeling connected to your spouse. She takes another opportunity to tell everyone how unhappy she is with her husband and Urkel-twin, Greg. When Greg tries to kiss her, Quad pulls away. She doesn’t want to be touched until he can stop being an emotional dumbass.  Curtis tells Quad and Greg to stop talking at each other. You know, because he’s an expert on marriage. After stepping out on his wife.

Before dinner, everyone gathers in the living room of Dr. Heavenly’s suite. When Toya doesn’t have a place to sit, Curtis grabs her by the hips and pulls her onto his lap. Not a smart move for a man who just got caught with his pants down. Toya tries to get up, but Curtis keeps his hands clamped on her waist. Jackie doesn’t bat a false lash. Curtis is just playing, y’all!

As she gets ready for dinner, Toya is joined by Mariah and they discuss Curtis’s faux pas. Mariah tells Toya to mind her own business. Let Dr. Jackie and Curtis hash out their problems on their own. Will Toya take such sage advice? Hell, no. This Toya, people!

Down at the beach, the table is set for dinner. The ladies grab a drink and dance around the tiki torches. For once, everyone’s getting along. Toya’s husband, Eugene, even films this rare moment for posterity. Oh, and Dr. Contessa Metcalfe and her husband, what’s-his-face, are there, too. Honestly, if the camera didn’t pan on these two every once in a while, I’d forget Contessa is on the show. After dinner, Heavenly starts the trip off with her first couples’ game — the Heavenly-wed game — to see how much the spouses know about each other. It should come as no surprise that Quad and Greg lose. Badly. Greg remembers refusing to pay for a wax before he and Quad had sex for the first time. He also claims he was drunk when he first told Quad he loved her. I guess he’s not expecting to get laid on this trip.

Surprisingly, Jackie and Curtis win the game. Curtis declares that their twin beds will be pushed together before the night is over. Jackie isn’t ready for that step, yet. So far, she’s only agreed to marriage therapy and permitting him to bring her prepackaged lettuce for dinner. Jumping from that to sex is quite a leap sir. Just simmer down, Curtis.

Toya finally confronts Jackie about Curtis’s earlier bad boy behavior. Jackie says it was all in good fun, and when she decided to forgive her husband, she meant it. No more checking his phone or wincing as he pulls Toya’s ass onto his lap like he’s going to stuff a ten in her g-string. Jackie is moving on, just like Dr. Ken instructed.

So, here’s what I’d like to know — how is Greg as a psychiatrist? If he can’t communicate with Quad and storms off every time they argue, how is that helping the situation? Now granted, Quad is a ball buster. She seems like she’s a pretty high maintenance partner, but still, communication and relationships are his bread and butter. Shouldn’t he have a handle on his marriage?