Ever been trapped in paradise? That’s how I’m starting to feel about Little Women Couples Retreat. Having said that, things get switched up with the couples this week and it’s quite humorous. Hasani has set up a scavenger hunt and handpicked the new partners. (Insert evil laugh here.) The goal is to force couples to get out of their “relational patterns,” and work together. Briana is already saying — I’m not here to work on my friendships, blah, blah, blah. Tonya also says she’s not excited about this exercise.

Here are the new couples: Tonya and David & Jazmine and Kerwin; Andrea and Jordan & Amanda and Chris; Briana and Todd & Christy and Matt. So basically the couples just swapped with another couple and switch into color-matching shirts. Christy tells Matt she’s started her period and Matt confesses he has the sh*ts today (and every day). Hasani explains all this stuff they must accomplish to win an “awesome” reward.

And they’re off! The group runs around looking like fools, but get this, Christy and Matt are doing really well as a team, and bonus, no one has crapped on themselves, not even during the balloon crushing – which they crush!  Christy and Matt are the winners! Hopefully it’s not a couple’s massage. So who are the losers…wait for it…Briana and Todd.

As the group watches Todd and Briana take forever to finish, Hasani tells Christy she needs to let Todd be a man and quit being his mother. More on this later – and please don’t eat anything in the meantime. So, Christy and Matt agree they won because they are both a couple of stubborn jack*sses. The prize is rum tasting. Ha! Poor Christy, she doesn’t drink anymore (darn it). But there’s a twist. They get to bring their partners and turn it into a double date. The winners suddenly feel like losers.

Before they disband, Matt apologizes to the group for calling people names and promises not to be a jerk for the remainder of the trip – which is huge, because Matt is a full-time jerk and it’s his only job. Hasani asks the men if they accept Matt’s apology. Jordan says he accepts it because Matt knows he was wrong. Chris says he don’t care. He ain’t gonna be Matt’s friend so he can take his apology and suck-it.

Sitting on the grass by themselves, Jordan and Amanda reflect on the exercise. Amanda says being with Chris was better than being with Matt. Jordan says working with Andrea was tough because he’s afraid of her. Jordan encourages Amanda to talk to her sister about how she’s going to earn a living if they aren’t the Tiny Twins.

Over and Christy and Todd’s villa, Hasani drops by for their therapy session. He asks them to rate their level of intimacy on a scale of 1 to 10. They both agree they are a zero. It seems they lost that loving feeling and it’s gone, gone, gone. Hasani explains that Christy and Todd have the dreaded parent/child relationship and asks Todd if he would ever make love to his mother. After Todd hesitates for a sec, he then says no, he would not make love to his mother. Whew! For a second I thought we were dealing with someone more disgusting that Matt. Christy is told to back the eff off, so she doesn’t have to have sex with her son. Eww, but problem solved.

Next up, after the Tiny Twins check in with their mom, Amanda presses Andrea for an answer about moving back to Atlanta. Andrea says she can’t give her an answer right now. Amanda says, uh, yes you can, and Andrea is like, uh, no I can’t. Andrea finally says for now she is only concerned with fixing things with Chris. Amanda is mad that she is no longer first and waddles out of the room.

Onto the rum tasting for three! They couples get schooled on rum. The first sample is 151 spiced-rum and it’s set on fire. Matt tells Briana not to worry if she gets drunk, he’ll carry her back to the room caveman style and take advantage of her. Christy and Todd say nothing. Normally I wouldn’t like a man saying this, but, meh, do whatever you want, Matt.

Back at the villas, Tonya and Kerwin have invited the losers over for some drinking of their own. The group bond over how no one wanted to be paired with Matt or Briana. Jordan asks the group how they felt about Matt’s fake apology. Everyone goes quiet because they know the only reason Matt apologized was because he won. If he would have lost, Matt would have blamed Christy’s ugly ass and stomped off. Chris says Matt’s apology was words. He needs to see some action. Good luck with that. Briana’s still waiting.

Tonya explains to the group that back in LA they’ve been dealing with psycho Matt for a long time and they’ve seen everything. The only person who believes Matt will change is Briana. Tonya tells the group Briana is very susceptible to reverse psychology. If you tell her to leave Matt, she will stay. So I guess we have our new strategy. Hey Briana, stay with Matt! Stay with Matt forever! 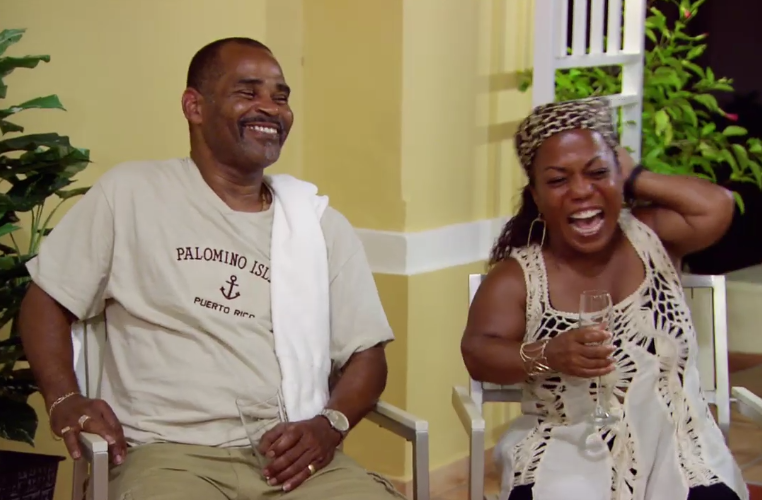 Back at the rum tasting, Matt shares with Christy how alike they are. And not just the constipation and diarrhea, but with other stuff, too. These two are peas and carrots – or shit and piss, take your pick. Hasani strolls up for some two-on-one and asks if Briana and Christy can reconcile their friendship. Flashbacks are shown of their past fights. Wow. There was a lot. Briana says she still has a hard time trusting Christy. Matt says from this point forward he will not tell Briana not to be friends with Christy – which as we just learned, will have the opposite effect. But of course, that was Matt’s plan all along. (Insert evil laugh here.)

Tune in next week when the group attempts to release the demons. (No, Matt is not leaving early.)

So, tell me what you think? Do you miss Lila? Do you believe Matt is growing? Will Tonya and Kerwin tie the knot? Will the Tiny Twins reunite in Atlanta? Do you care about any of them?