The twins Amanda and Andrea are painting Andrea’s apartment before the baby comes. They are having fun but notice that the painter’s jumpsuits don’t come in fun size.  #TheStruggleIsReal.  Minnie arrives and is laughing and bragging about how she tricked Ms. Juicy to meet with her but showed up with her body-guard mama and attacked her with chicken wings.  The twins admit that Minnie knew what she was doing by bringing her mama who can go from 0-100 in an instant.  Amanda asks if Minnie told Pastor Troy about her miscarriage.  Minnie says not yet because she cherishes their friendship and thinks Pastor Troy will dump her “as a friend” when he finds out she is not pregnant.  Whatever Minnie.   Minnie admits to being envious of Andrea’s pregnancy because she longs for the day when  someone will  call her mommy.  Well stop calling your own mommy every time you get into trouble, grow up, and maybe you too can become a mom.  #MarriageOptionalTheseDays

Minnie meets with Pastor Troy.   She tells Pastor Troy she “thinks” she may have had a miscarriage.  This girl.  Pastor Troy doesn’t miss a beat (no hug, no comfort no- aw damn shawty we lost our child!!) but instead says “oh well we just have to do it again, this time froggy style!”  Minnie says in her talking head she is glad Pastor Troy reacted “faithfully.”  What?   Because Pastor Troy is going along with this bullshit, Minnie presses the issue of their relationship.  He tells her he’s not trying to put a ring on it, but if she needs some more baby batter he will oblige.  Holla back.  #ClassyGuy.

Bri is working out at the gym and we get to meet Melissa.  Apparently Melissa is a fashion model who walks runways in Paris and Tokyo.  She says her size doesn’t stop her flow because it’s all about attitude.  Bri asks her to bring her attitude to Black Bikers Week.  Melissa jumps at the chance.  Forget Paris, you gotta get in where you fit in.  Yeah I can see supermodel s Naomi Cambell or Linda Evangelista doing the same thing.

Amanda and Andrea take their men on a road trip to visit their parents and baby Andre.  The  parents shower them with love and spoils pregnant Andrea.  Then the conversation turns serious.  Amanda feels Chris needs to man up when it comes to her sister.  Their mom begs Chris just to be good to her daughter.  Papa tells Chris that anyone can make a baby, but you have to be a father.  Chris promises this time he is in it for the long haul.  Papa says he is watching him.  The next morning Amanda and Andrea take Andre to the park.  Andrea starts crying because she and Chris got into a fight that night and he left.  #ThatWasFast #Shocker.  Amanda tells her she will be by her side, forget about Chris. 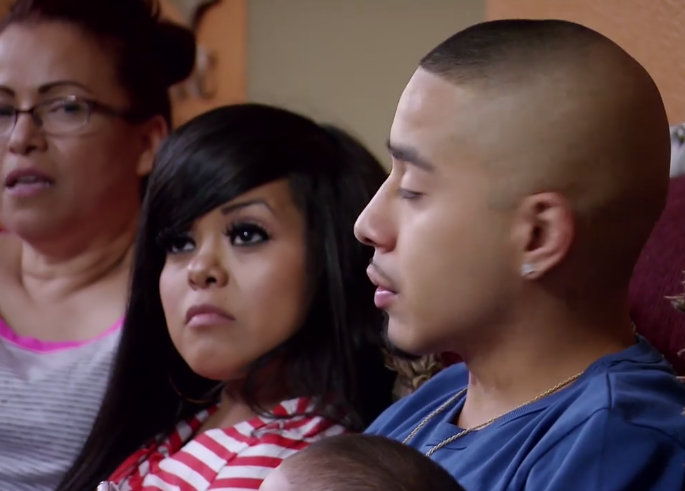 The twins are still in Dallas shopping for baby clothes for baby Aubrey.  Yes Andrea is having a girl!  Chris walks into the store and is upset that he can’t get “no love” from Andrea.  She is like “are you serious, you left me last night!”  Chris says he went to go visit his mama.  Okay.  Andrea starts getting loud in the store.  Chris reminds her they are in public.  Andrea says “she doesn’t give a damn!”  Little Mama is giving him the business…and then she starts crying.  Amanda comforts her sister.  Chris doesn’t budge.  He says she keeps living in the past.  He apologies.   Amanda calls bullshit.  #MeToo

Emily Skype with Minnie and Bri. She gives them an update about baby J.J. He is going to need another operation.   Emily feels like they are running out of options.  She breaks down.  Bri starts crying too.  Minnie says they will stay prayed up.   #Prayers4JJ

It is time for the twins to leave their parents and return to Atlanta.  Everybody is crying, except the boyfriends.  Andrea says her insurance is only good in Atlanta (huh) so she has to live there to have the baby.  It is a sad scene.

Minnie is at her mom’s house.  Since her mom hit Ms. Juicy with a plate of chicken wings,   Ms. Juicy has hit Mama Bear with a restraining order.  She has to remain at least 200 yards from Ms. Juicy.   Tammy says she cannot believe this bullshit.   Well you should have thought twice before you march your humongous ass to attack a little person on behalf of your grown daughter with a plate of chicken wings.  Minnie tells her mama she is about to go beat Ms. Juicy’s ass.  Right.  Her mama tells her to stay put but warns if she has to take off work to go to court over some chicken wings, she will punch  Ms. Juicy  in the face the next time she sees her.  Not a good way to help your case Tammy.  Minnie is thinking about backing out of the BBW trip (because her bodyguard is on restraint).  Tammy tells Minnie you betta go and you betta handle your business.

Ms. Juicy is driving Bri, Monee and Melisa 5 ½ hours to Myrtle Beach ready to turn up.   Melissa asks what is Black Bikers Week.  Yeah I usually just jump in the car with folks I barely know to go to another state and then ask what are attending. #JustStop Bri says it is a party filled with bikers.  Monee and Ms. Juicy clarify – Chocolate Black fionnnnne bikers (that’s why it is called Black Bikers Week – Same as Daytona Beach Biker Week but with more melatonin).  Juicy tells them about the restraining order on Tammy.  Monee says maybe this will teach Minnie to stop lying so much.

In Amanda’s car with Minnie they discuss the restraining order.  This time she it’s not so funny.   Needless to say she feels it is now time for somebody to shut Ms. Juicy down.

The first car group (Ms. Juicy, Bri, Monee and Melissa) arrive at the “beach house”, which is another name for “hey I will rent out my old house during this week, charge 3x as much because all the other hotels are sold out and make some money).  Ms. Juicy is not impressed with all the knotty pine accommodations but it will have to do.  They chose bedrooms (there are only three) and start drinking.  Some wonder if Minnie will show up.  Ms. Juicy basically says Minnie loves attention and would show up to the opening of an envelope.

Minnie and Amanda arrive and right away Minnie asks Ms. Juicy “why did you file a restraining order on my mama. She could lose her good job. “ Ms. Juicy tells Minnie her mom attacked her and hit her with a plate of chicken wings with ranch dressing.  Minnie says Ms. Juicy has taken things too far.  Ms. Juicy replies, “no your mama took it too far when she attached me with a plate of chicken wings!”  Monee chimes in “see this is what happens when you lie Minnie.  You get other people turnt up (your mama) and then when they react to your nonsense, you play the victim.”  I agree.    Ms. Juicy then tells Minnie why would she send another grown woman to check her, about asking “qwerstions” when err ‘body was asking “qwerstions” at the baby shower.  Minnie lies and says “no you were the only one asking questions.”   Amanda says, uh I think my sister asked you questions Minnie too.  Melissa is looking like what the hell did I get myself into. Minnie decides she has had enough. She just wants to kumbya and move on.  Ms. Juicy says she will sleep with her room door locked.  To Be Continued.

Next week is a bunch of twerking, bare bottoms, and strip clubs.  Amanda and Melissa get into an argument over what else—more questions!  Andrea goes into labor.

Do you think Ms. Juicy went too far with the restraining order?  Do you think Minnie will keep lying?  Did Minnie and her bullying mama get what they deserved?