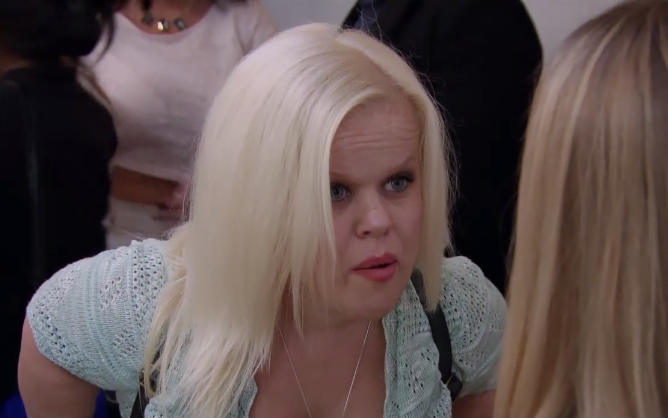 Guess who’s having a baby? We join Little Women: New York for the season finale in the hospital with Katie. She has started having contractions after fighting with Lila and Dawn in the laundromat. Katie wasn’t supposed to have little Kinzley for another week, but that stork is ready to land now.

Dawn and Lila feel absolutely no remorse for triggering this and when they meet up with the rest of the crew at Lila’s apartment, explain that it’s not their fault Katie went into early labor. Their tone was as gentle as a lamb as they told Katie her boyfriend was a loser. They call Jess to check in and find that baby Kinzley has arrived and has six fingers. Jazmine is worried this was due to smoking, but it wasn’t. Dawn again says she feels no guilt whatsoever about the confrontation.

Jess asks PJ and Katie if they’ve made plans to return to Seattle because she wants her house back. Crickets can be heard chirping in the background. Jess doesn’t want to kick them out, just yet, she just wants to plant the seed to grow elsewhere.

After Katie returns home, her mother wants to plan a sip and see for the baby. Katie says, I’m exhausted, but whatever, everyone can come but Lila and Dawn. Kathie advises her daughter to be the bigger little person. Katie agrees because she’s a role model now, but warns if there’s any drama, they are out of there. Of course there will be drama, it’s the season finale!

David calls in to check on Jazmine. She tells him the auditions aren’t going well and he’s not there to take her anger out on. David tells Jaz not to give up, but doesn’t say anything about her going to Florida or his coming to New York.

Lila, Dawn, and Jazmine meet in the park for girls’ talk. Dawn announces that she has met a man who is also a little person. Jaz asks if she’s told David about him, and she says, no. They’ve been texting, but she and her brother have not even acknowledged their big blow out. Dawn asks Jaz if she’s shared with her husband that Lila is meeting random men on the internet and bringing them back to their apartment. Jaz is mad, sort of, and tells Dawn this isn’t her business. Way to go Jaz for standing tall. Lila says she’s tired of being slut-shamed right in front of her face. It’s supposed to be done behind her back. Besides, Lila is an adult having a little fun and Dawn should try it.

Jess has returned from her walk with her four-legged baby, Chi Chi and Katie “asks” her to hold her Kinzley, feed her, change her and give her a bath. Katie wants to take a nap. PJ and Kathie are standing right there, why don’t they do it? While changing the diaper, Kinsley’s extra finger falls off and Jess freaks out, thinking she’s broken Kinzley. Kathie gets a baggie to save the rotted skin for memories. Yuck! Jess has reached her baby limit.

Lila and Jazmin meet up in Time’s Square. Lila is trying to cheer her up and encourage to keep going on acting auditions and getting rejected because it’s her dream. Jaz says she is defeated and wants to leave and be with her best friend whom she’s married to. Lila can’t relate because she just orders up a new man on Tinder when she’s lonely, but Jaz appreciates the pep talk. They hug it out while tourists openly qawk like it’s some kind of Time Square freak show.

The following morning, Jess brings Katie a frappuccino. She is ready for a different kind of pep talk, the move-out-now kind. Jess wants to have fun again and not to be the live-in nanny for a dysfunctional family. Jess suggests that maybe PJ can step up to the plate and do something. Hang on a moment while I stop laughing. Katie needs more time to figure out this whole mom-thing, but we all know that takes 18 years. In any event, the message is received.

It’s time for the sip and see, but before that, Katie announces that she and PJ might move back to Seattle if they can stay with Kathie for a while. Kathie says they can, but PJ needs to get a real job this time. He says he will, and had a job that one time, but as soon as they started telling him what to do, he was out of there. The nerve. Katie tells her mom to stop judging and PJ tells Kathie to stop looking at him like he’s a slacker. Tensions rise and at this point, Jess is looking forward to seeing Lila and Dawn.

Jess tells Lila and Dawn to STFU because the baby’s about to make an appearance and their yakking voices will make her cry. Lila and Dawn to take their argument to the bedroom where Dawn screams that she is a concerned effing friend and Lila can’t handle the truth about being a slut. Lila is about to open a can of whoop-ass on Dawn, which is funny, because I thought these two were against midget wrestling. Lila swings her purse at Dawn, calls her a sick bitch as she cries and walks out the door. Jason and Jaz follow.

Lila – is no longer on speaking terms with Dawn. She refuses to be slut-shamed…and continues to host parties of two in her home for internet friends.

Dawn – may be at odds with friends and family, but believes she doesn’t need an app to find true love. She continues to work hard and play…very little.

Jazmine – bought a one way ticket to Florida so she could spend some quality time with her husband, David. They’re talking about starting a family soon. Dawn isn’t on the short list for godmothers.

Katie – PJ, Katie, and Kinzley have decided to move temporarily back to Seattle and stay with Kathie. Although exhausted, Katie loves being a mom. PJ is still making beats and trying to stay on Kathie’s good side.

Jason – is still in a long distance relationship…he continues to live in New York rather than in Connecticut with DJ. He’s not sure how much more girl drama he can handle.

Jess – is getting back into the dating scene and creating a life of her own. Having questioned whether she was ready for motherhood, she’s now fully embraces it…as mom to her dog Chi Chi.