Wendy Owen is a freelance writer for All About The Tea.

Reza has Asa and MJ over to his pad for Champs, but there’s no food. What’s a heifer to eat? Ah. Leftovers. Meaning a warmed-over rehash of the Jessica and Mike dinner. The real news is that Reza and Adam have decided to not have Mike at his wedding, and that they’re going to Thailand for their honeymoon. Isn’t Thailand one of those countries where you get thrown in jail for life for littering? Ryan Seacrest couldn’t pay me enough to go there.

GG and MJ are going to the doggie stuffer, and GG says she’s going to date some new guy, but I can’t really grasp the details since I’m so distracted by the Brit Mod 60’s hat MJ has stuck on her melon. Anyway, seems MJ has watched too many episodes of “Bates Motel” because she thinks this taxidermy idea is a good one. Maybe she should just make a hat out his carcass? The unlikely voice of reason is GG. She points out that’s it’s the stupidest idea since MJ bought that hat. MJ relents — to the incinerator!

It’s Asifa‘s birthday, and time for her 70’s Bollywood theme party. Oh. Also time for Bobby to pull some “diamonds” out of some tissue paper and give them to Asifa. Where’s the box, bitch? Anyway, Mike and Jessica are not invited because GG is there, but at the doggie funeral, MJ wants the drama, so they are invited to that party.

Bobby spends his time complaining to anyone and everyone about Asifa, so they’re on the right track to a second divorce. The cake comes, and Reza decides the best use for it, is to throw it around. It goes into Asifa‘s cleavage and all over Adam‘s face. And Mike and Jessica were not invited because they might cause a scene?

(Oh no! I’m watching in real time. What’s wrong with me? I know better than to watch in real time, and hear this: “Dear Poise, Women are using period pads for pee.” Kill me now, please.)

GG‘s going on her date. She’s going bowling. She bowls by spreading her legs, bending over, and rolling the ball down the lane. This is her mating ritual. This, and drinking. Ah to be free, white and over 31! She’s drinking Jack neat because “Whiskey makes you frisky.” Way to sell yourself, girl! “I like you’re style, by the way,” says the unknowing victim. Won’t be long before she’s pukin’ all over you if you play your cards right, boy! He’s too smart for that. He tells her he’s taking her home. 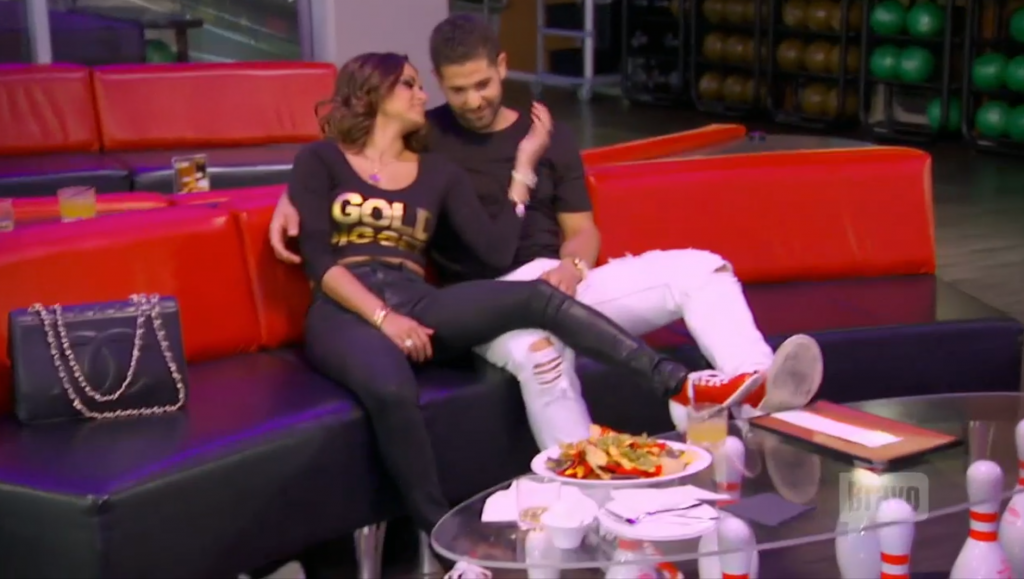 It’s time for the dead puppy party. It’s a catered affair. and everyone’s wearing dark colors and stupid hats. Seems to be the stupid hat episode. GG‘s not worried about seeing Mike. Especially since the second time was the charm and she passed her polygraph test that said she was drunk and no one had sex — just like on her bowling date. Mike shows up with his dog. No not Jessica, the other dog. MJ  makes a weird speech. Her moms looks at her like she’s crazy. She knows. She knows.

After the speech, everyone is invited to eat. Such a surprise. Food at a Persian get together? GG hugs MJ and squeezes her butt. Reza talks to Mike and squeezes his balls. GG tries to jump in there, but Mike shuts her down, then Reza and everyone else take GG‘s side. Reza drops the bomb: “Adam and I don’t want you at our wedding.” He goes on to explain he likes Mike okay, but Jessica can’t come no matter what.  And that’s all she wrote.